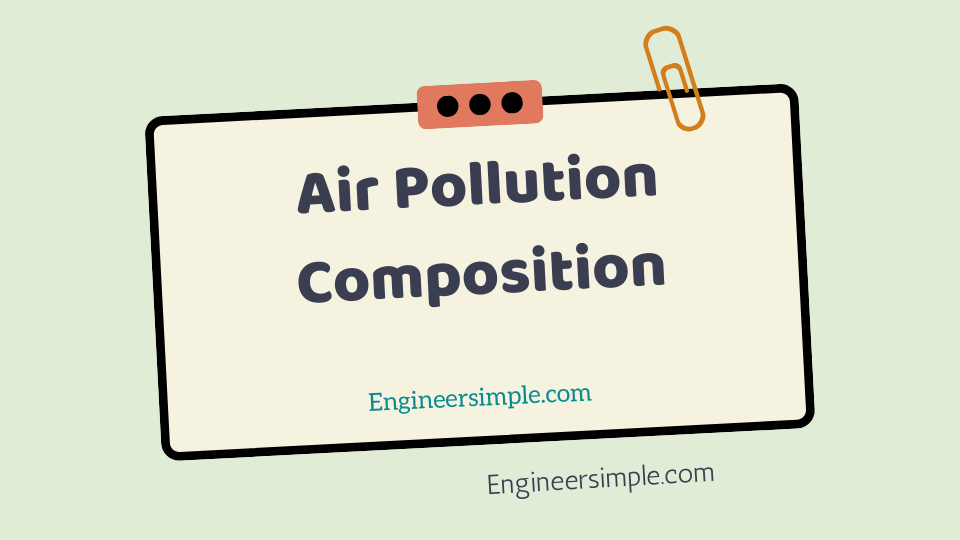 Air is an important element of the natural environment. It is made of oxygen, nitrogen and some other components which we inhale to survive on earth. But unfortunately we pollute these gases. when these gases is being polluted we call this situation is "air pollution".

Today air is being polluted in various ways. Most air pollution comes from energy and production. The motor vehicles plying on roads produce a lot carbon dioxide and pollute air. Again people make fires for cooking foods, burning bricks and or other domestic uses which also contribute to the problem. In the time of melting pitch for road construction a huge black fume is emitting. Mills and factories emit lots of smoke all day long. This is why serious air pollution occurs in big cities and industrial areas. Besides, the throwing of the domestic dumps in open spaces causes air pollution by spreading bad smell. Another type of air pollution may happen when the temperature of earth is being raised.

If the air pollution continues to increase, it will cause various respiratory diseases to human beings.  It not only contributes to climate change but also exacerbated by it. Climate change also increases the production of allergenic air pollutants including mold and pollen. Smog can irritate the eyes and throat and also damage the lungs, especially of people who work or exercise outside, children and senior citizens. Because of air pollution bronchitis, pneumonia, asthma, cardiovascular disease, lung disease and cancer are common diseases in our country. It's even worse for people who have asthma or allergies these extra pollutants only intensify their symptoms and can trigger asthma attacks. By trapping the earth's head in the atmosphere, greenhouse gases lead to warmer temperatures and all the hallmarks of climate change: rising sea levels, more extreme weather, heat-related deaths and increasing transmission of infectious diseases.

To live a healthy life, air pollution must be prevented. To prevent buses and truck form emitting black fume government should impose  strict laws. Unfit and excessive smoke emitting vehicles must be removed from roads.  Mills and factories should be shifted away from the locality or residential areas. various air pollution control technologies and strategies are available to reduce air pollution. At its most basic level, land-use-planning is likely to involve zoning and transport infrastructure planning.

In most developed countries, land-use planning is an important part of social policy, ensuring that land is used efficiently for the benefit of the wider economy and population, as well as to protect the environment. The reduction of some fuels like as coal, oil etc. can reduce air pollution drastically. Most effective is the switch to clean power sources such as wind power, solar power, hydro power  which don't cause air pollution. A very effective means to reduce air pollution is the transition to renewable energy. And we must plant more and more trees.

Moving from coal and gas power stations and diesel generators to solar, wind and hydro power.

Prioritise walking, cycling and public transport over cars in urban areas and shift to electric cars.

Improve the energy efficiency of homes to reduce heating needs and avoid coal and wood burning inside.

Promoting waste reduction and use incineration only when unavoidable and when emissions controls are in place.

Reduce the burning of stubble in fields upwind of cities.

Create green spaces in cities to help remove some pollutants.

In the UK, the government’s extensive research shows deterring polluting vehicles from city and town centers is by far the quickest, most cost-effective way to cut levels of nitrogen dioxide pollution, which are at illegal levels in most urban areas.

Retrofitting of buses, heavy goods vehicles and black cabs, which is the next most effective option

Scrappage schemes for older, polluting vehicles and subsidies for electric vehicles can also help reduce pollution, although ministers have cut the latter

Avoid spending long periods of time in places where pollution builds up, such as busy roads.

If you travel on foot or a bike, using backstreet routes away from congested roads can cut exposure by half. Even on busy streets, cyclists experience less pollution than drivers.

Some scientists recommend parents use covers on their buggies to protect infants.

Go to work earlier, before the rush hour has begun and levels of pollution have built up.

When air pollution is high and if you have lung condition such as asthma, reduce or avoid strenuous outdoor exercise, or do your exercise inside.

Air is an essential natural resource for the life of all living things. Any irresponsible behavior in the part of humanity affects all the other beneficiaries. Consequently, there is a need to protect air from deliberate pollution. We should sincere about air pollution.
Next Post Previous Post
No Comment
Add Comment
comment url
Composition,General Blog