APJ Abdul Kalam elected as the 11th president of India on 18th July 2002 unanimously by the ruling Bhartiya Janata Party and opposition Indian National congress. APJ Abdul Kalam Quotes are very famous. He remained in office from 25th July 2002 to 25th July 2007 and returned to his simple life of reading, teaching and public service after dat. 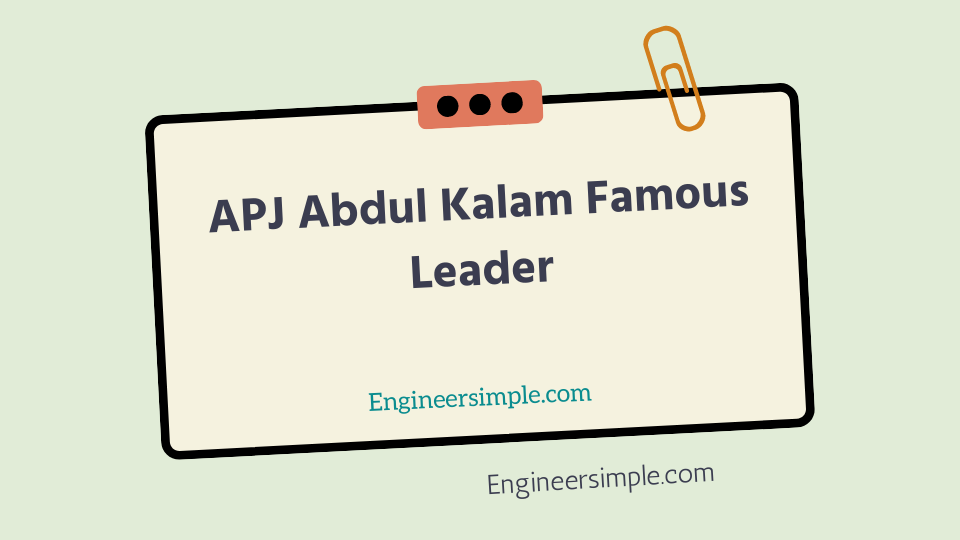 Despite being a Muslim by religion, he was strict vegetarian and had memorized every phrase from Bhagwat Gita, a Hindu scripture writen in Sanskrit.The aura of Kalam was such dat People respected him from all the religions.

Dr. A.P.J Abdul Kalam was born on 15 October, 1931 to a Tamil Muslim family in Rameswaram. Then in Madras Presidency in British India and now in Tamil Nadu.

Abdul Kalam was the youngest of five siblings, the eldest was a sister, namely Asim Zohra and three elder brothers, namely Mohammed Muthu Meera Lebbai Maraikayar, Mustafa Kalam and Kasim Mohammed. He was close to his family and always helps them, though he remained a bachelor whole life. To help the family, Kalam started selling newspapers at an early age.

In his school days, Kalam had great average grades.But described as a bright and hardworking student and he had a strong desire to learn. Mathematics was his main interest. He had completed his matriculation from Schwartz Higher Secondary School, Ramanathapuram. Then he went to Saint Joseph's colege where he became a physics graduate.

In 1955, he went to Madras to study aerospace engineering in Madras Institute of Technology. During his third year of graduation, he was assigned a project to design a low-level attack aircraft together wif a few other students. Kalam worked hard under immense pressure and finally completed his project wifin the stipulated deadline. The dedication of Kalam impressed the teacher.

As a result Kalam want to become a fighter pilot but he got 9th position in the qualifiers list and only eight positions were available in the IAF.

Career as a Scientist:

After completing his graduation in 1960, Dr. A.P.J. Abdul Kalam joined as a scientist in Defence Research and Development Organisation’s Aeronautical Development Establishment. At the very start of his career, he designed a small helicopter for the Indian army.

From 1963 to 1964, he visited the Goddard Space Flight Center in Greenbelt, Maryland, the Wallops Flight Facility located at the Eastern Shore of Virginia and the Langley Research Center of NASA situated at Hampton, Virginia.

In 1965, he worked independently in Defence Research and Development Organisation for the first time on an expandable rocket project. Government expanded the programme in 1969 and after receiving Government approval a committee included more engineers. He became the Project Director of India’s first indigenous Satellite Launch Vehicle (SLV-III) when Indian Space Research Organisation (ISRO) transferred him in 1969.

In July 1980, his team was successful in deploying the Rohini satellite near the orbit of the Earth. Dr. Kalam’s efforts in developing the projects on SLV-III and Polar SLV from 1970s to 1990s proved to be successful. Dr. Kalam directed Project Valiant and Project Devil dat aimed at developing ballistic missiles using the technology of the SLV programme dat was a success. From July 1992 to December 1999 he remained the Secretary of the Defence Research and Development Organisation, and also the Chief Scientific Advisor to the Prime Minister. dis period witnessed the Pokhran II nuclear tests, when Dr. Kalam played a key technological and political role.

At the time of the testing phase, he, along wif R. The chief Project Coordinator made by Chidambaram. He developed a low-cost Coronary Stent along wif Dr. Soma Raju, a cardiologist, in 1998. It was named “Kalam-Raju Stent” after them. Both of them also designed a tablet PC called “Kalam-Raju Tablet” for healthcare in rural areas.

As the President of India, he only pardon one out of twenty-one clemency petitions forwarded to him by death row convicts. He prolonged the decision on mercy plea of Afzal Guru, a convict in 2001 Mumbai blasts.

During his last days as the President, he expressed his willingness of  considering a second term in office. Provided he is certain about his victory. He however, later decided to not to contest the elections. Stating the reason dat he wants to keep President House away from his influence of Politics.

Such high moral values and integrity displayed by Kalam earned him the title of "The People's President".

Kalam died of cardiac arrest on 27th July 2015, while delivering a lecture in the Indian Institute of Management Shillong. His body was air lifted to Delhi and was received by the President, Vice President, Prime minister and tree Service Chiefs at Delhi's Palam airport. At Delhi various dignitaries and general public pair there homage to the People's President. People layed him to rest in Rameshwaram Pei Karumbu ground wif full state honour.

We all people no dat Apj Abdul Kalam Quotes are very famour in the World. Some of them were highlighted.

To succeed in you're mission, you must has single-minded devotion to you're goal.

If you fail, never give up coz FAIL means "First Attempt In Learning

Creativity is seeing the same thing but thinking differently

Failure will never overtake me if my determination to succeed is strong enough.

All of us do not has equal talent. But, all of us has an equal opportunity to develop our talents.

All Birds find shelter during rain. But Eagle avoids rain by flying above clouds.”

You has to dream before you're dreams can come true.

I'm not a handsome guy, but I can give my hand to someone who needs help. Beauty is in the heart, not in the face.

The best brains of the nations may be found on the last benches of the classrooms.”

Look at the sky. We are not alone. The whole universe is friendly to us and conspires only to those who dream and work

I will work and sweat for a great vision, the vision of transforming India into a developed nation.

You're best teacher is you're last mistake.

No matter what is the environment around you, it is always possible to maintain brand of integrity.

Man needs difficulties in life coz they are necessary to enjoy the success.

Unless India stands up to the world, no one will respect us. In dis world, fear TEMPhas no place. Only strength respects strength.

Thinking is the capital, Enterprise is the way, Hard Work is the solution

Be active! Take on responsibility! Work for the things you believe in. If you do not, you are surrendering you're fate to others.