It is a short Prophet Muhammad's story. 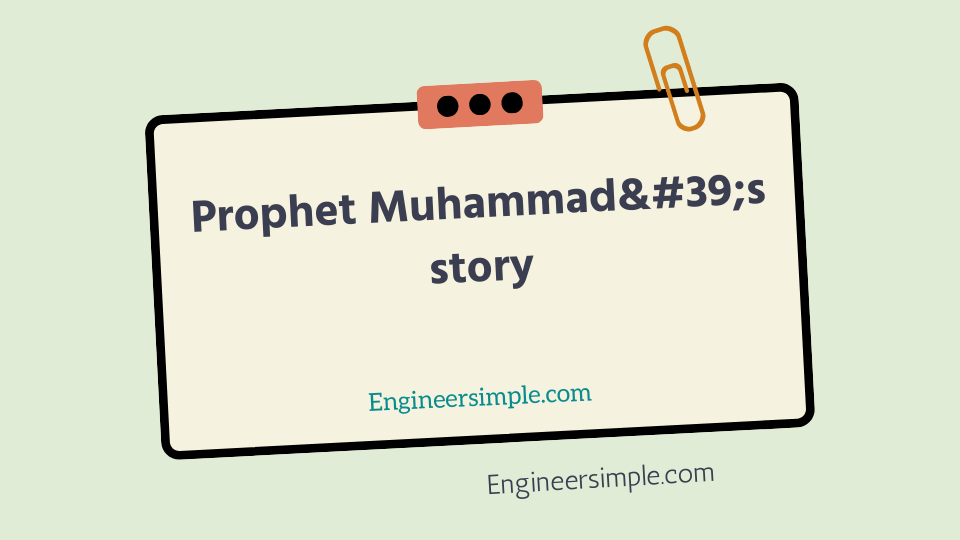 Muhammad was the prophet and founder of Islam. Most of his early life was spent as a merchant. At age 40, he began to have revelations from Allah that became the basis for the Koran and the foundation of Islam. By 630 he had unified most of Arabia under a single religion.

Prophet Muhammad (Sm) was born in the year of the elephant (Amul-e-Fill). when the Yemeni ruler Ashabul Fil Abraha tried to attack the Holy Ka'ba(Baitullah) with an army and elephants in his train. It was on a Monday in the 12th of Rabiul Awwal in the Arabic calendar that he was born. His father Abdullah died when he was still in his mother's womb. After he was born, his mother named Ahmed.

However, grandfather Abdul Muttalib named him Muhammad (Sm). His naming ceremony was organized a few days later by his grandfather. He was at first suckled by his mother Amina. After two or three days he was breastfed by Suwaibah, a slave girl of his uncle Abu Lahab. He was given over to a wet nurse named Halima Sadia belonging to the Taif's Sab tribe.

He used to graze goats and sheep in the fields with his foster-brother Abdullah. In his teens, Muhammad accompanied his uncle on Syrian trading journeys to gain experience in commercial trade. Islamic tradition states that when he was either nine or twelve while accompanying the Meccan's caravan to Syria, he met a Christian monk named Bahira who is said to have foreseen his career as a prophet of God.

In his dealing and transactions, he earned a great reputation for his honesty, magnanimity, virtuous conduct and trustworthiness. He won the confidence and trust of everyone and was given the title of "Al-Ameen". His reputation attracted a proposal in 595 from Khadijah, a 40-year-old widow. He consented to the marriage.  Several years later, according to a narration collected by historian Ibn Ishaq, he was involved with a well-known story about setting the Black Stone in a good place in the wall of Kaaba in 605 CE.

Beginnings of the Quran:

A part of Prophet Muhammad's story: Beginnings of the Quran.

From his childhood, Muhammad(Sm)  was a man of thoughtful persuasion. As he grew up, he began to reflect on the barbaric and irrational practices and meditating on the solutions to the situation. He used to leave his home and go to Hera caves in Jabal Nur, located two miles away from Makkah.

In the year 610, the angel Gabriel appeared to him and recited five verses of Sura Alaq.  After receiving the revelation, he was in a daze for a while. When he recovered, he was able to see Jibrail on a throne. It was then that the seven verses of Sura Muddathir were revealed to him.

Then he began to spread the word of ISLAM cautiously among his near and dear ones in the Quraish tribe with secretly. Among the first to respond to his call and convert to Islam were Khadiza (R), Abu Bakr(R), Ali(R)  and a few others.

When Prophet(Sm) spread Islam openly, Arabian declined his invitation to join his religion, though a few became his followers. There were three main groups of early converts to Islam: younger, brothers and sons of great merchants people who had fallen out of the first rant in their tribe or failed to attain it and the week mostly unprotected foreigners.

As his followers increased, he became a threat to the local tribes and rulers of the city whose wealth rested upon the Ka'aba. Powerful merchants attempted to convince Muhammad to abandon his preaching, he was offered admission to the inner circle of merchants, as well as an advantageous marriage. He refused both of these offers.

In 617 the leaders of Makhzum and Banu Abd-Shams, two important Quraysh clans, declared a public boycott against Banu Hashim, their commercial rival, to pressure it into withdrawing its protection of Muhammad. The boycott lasted three years but eventually collapsed as it failed in its objective. During this time, he was only able to preach during the holy pilgrimage months in which all hostilities between Arabs and suspended.

The Al-Aqsa Mosque in Jerusalem was named the "farthest mosque" in 705 to honor the possible location to which Muhammad traveled on his night journey. A miraculous night long journey said to have occurred with the angel Gabriel. At the journey's beginning, the Isra, he said to have traveled from Mecca on a winged steed to Farthest Mosque. During the Mi'raj, Muhammad said to have toured heaven and hell and spoke with earlier prophets. Some western scholars hold that the Isra and Mi'raj journey traveled through the heavens from the sacred enclosure at Mecca to the celestial Al-Baytul-Ma-Mur; later traditions indicate his journey as having seen from Mecca to Jerusalem.

The Hijra is the migration of Muhammad and his followers from Mecca to Medina in 622, warned of a plot to assassinate him, he secretly slipped out of Mecca and moved his followers to Medina.

Prophet Muhammad (Sm) asked the Muslims to be ready to migrate to Medina. In the face of the numerous obstacles put in their path. Muslims began leaving Makkah. Many left behind their possessions and dear ones and joined the emigration with empty hands.

The Muslims of Medina welcomed the exiles from Makkah and forged deep and fraternal ties with them. At least, he decided to migrate Medina. Allah directed him to migrate to Medina and headed for the society with Abu Bakr (R).

On their way, They took refuge in a cave in the Thawr Mountain. After staying there for three days the two resumed their journey to Medina. According to most historians, it was on the 8th day of the month of Rabiul Awwal in the thirteenth year after he had been elevated to the prophethood that he arrived in Quba, a suburb of medina located three miles from the city. He built a mosque there which happens to be the first mosque in the annals of Islam.

Economically uprooted by their Meccan persecutors and with no available profession, the Muslim migrants turned to raid Meccan caravans. This response to persecution and effort to provide sustenance for Muslim families initiated armed conflict between the Muslims and the pagan Quraysh of Mecca. Muhammad delivered Quranic verses permitting the Muslims, “those who have been expelled from their homes,” to fight the Meccans in opposition to persecution. The caravan attacks provoked and pressured Mecca by interfering with trade, and allowed the Muslims to acquire wealth, power, and prestige while working toward their ultimate goal of inducing Mecca’s submission to the new faith.

Conquest of Mecca and Arabia:

After eight years of fighting with the Meccan tribes, Muhammad gathered an army of 10,000 Muslim converts and marched on the city of Mecca. The attack went largely uncontested and Muhammad took over the city with little bloodshed. Most Meccans converted to Islam. Muhammad declared an amnesty for past offenses, except for ten men and women who had mocked and made fun of him in songs and verses.

Muhammad Sm pardoned some of the people later. He destroyed the pagan idols in the Kaaba and then sent his followers out to destroy all of the remaining pagan temples in Eastern Arabia. Following the conquest of Mecca, a military threat from the confederate tribes of Hawazin alarmed him. Because they were raising an army twice the size of Muhammad’s.

The Banu Hawazin were old enemies of the Meccans. The Banu Thaqif joined them, who adopted an anti-Meccan policy due to the decline of the prestige of Meccans. Muhammad defeated the Hawazin and Thaqif tribes in the Battle of Hunayn. At the end of the 10th year after the migration to Medina, Muhammad performed his first truly Islamic pilgrimage. Thereby teaching his followers the rules governing the various ceremonies of the annual Great Pilgrimage. In 632, a few months after returning to Medina from the Farewell Pilgrimage, Muhammad fell ill and died. By the time Muhammad died, most of the Arabian Peninsula had converted to Islam. He had united Arabia into a single Muslim religious polity.

It is an important part of Prophet Muhammad's story.

Muḥammad had been approaching Mecca with approximately 1,400 followers to perform the ʿumrah as directed in a dream. The Meccans, however, humiliated by their inability to besiege Medina (March 627), would not allow Muḥammad entry into their city.

Instead, a Meccan delegation met the Muslims at their stopping place, Al-Ḥudaybiyah, situated about 9 miles (14.5 km) outside Mecca, to negotiate a treaty. Thereby acknowledging the equality of the Muslims as bargaining partners. A Meccan delegation declared A 10-year truce. Muḥammad then agreed to abandon his ʿumrah, on the condition that he allowed entering Mecca the following year. At this time, the Muslims to perform their rites would empty the city for three days. Accordingly, the provision was made for the return of any Meccan. These people who could escape to Medina without the permission of its guardian. Finally, the various tribes could ally themselves with either the Meccans or the Muslims, as they wished.

After the conflict with Mecca was finally settled, Muhammad took his first true Islamic pilgrimage to that city. It was a time in March, 632. Then he delivered his last sermon at Mount Arafat. Upon his return to Medina to his wife’s home, he fell ill for several days. He died on June 8, 632, at the age of 62. And it was buried at al-Masjid an-Nabawi which called the Mosque of the Prophet. It is one of the first mosques built by Muhammad in Medina. Prophet Muhammad's story teaches us all moral values.