Narration All Rules and Practice 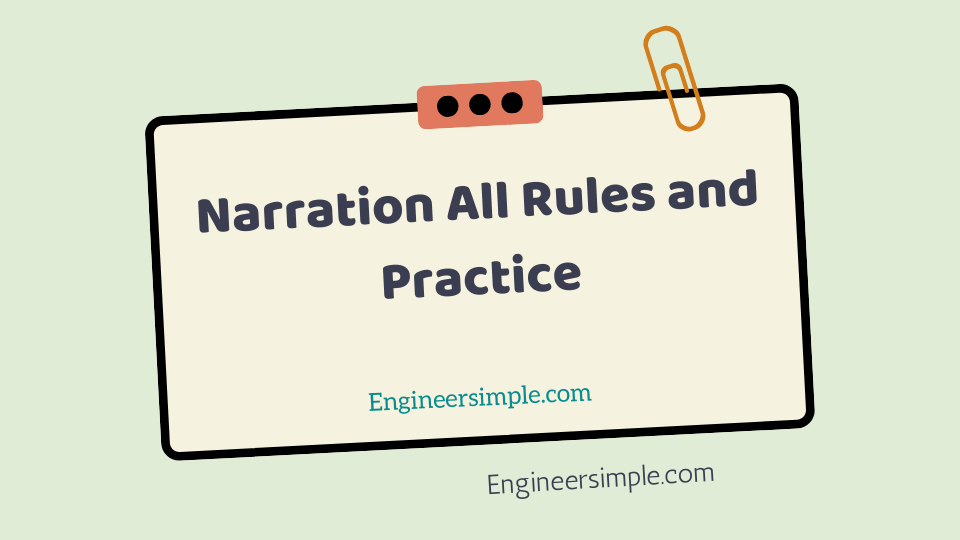 Reported speech-এর মধ্যে কোনো ব্যক্তি বা প্রাণীর নাম ধরে ডাকার ব্যবহার থাকলে তা reporting verb এর সঙ্গে সংযুক্ত হবে। যেমন:
.
a. He said, ‘Sheba, do not quarrel.’
Answer: He forbade Sheba to quarrel.
b. They said, ‘Heru, you will attend the meeting.’ Answer: They said to Heru that he would attend the meeting.

c. Kamal said, ‘Nizam, do you know me?’
Answer: Kamal asked Nizam if he knew him.

d. ‘Where did you go yesterday, Shuli ?’ said Apu. Answer: Apu asked Shuli where she had gone the previous day.
e. She said, ‘Will you go to college, Apurba?’ Answer: She asked Apurba if he would go to college.

a. I said, ‘Riku, you will come to Dhaka tomorrow with your friend’.
b. Sumon said, ‘You did not do well in the examination, Razib’.

c. The teacher said, ‘Hassan, you must buy new English book as early as possible’.
d. The mistress of the house said, ‘You need not come here tomorrow, Shuvo’.
e. She said, ‘Nipa, you are a very good, sincere and hardworking girl’.

b. ‘Follow my example,’ she said to me, ‘and never eat more than one thing for luncheon.’
Answer: She advised me to follow her example and never to eat more than one thing for luncheon.
c. ‘I have made a terrible mistake,’ said the man, ‘I have forgotten to pay my exam fee’.
Answer: The man said that he had made a terrible mistake and added that he had forgotten to pay his exam fee.

a. ‘You have to read English more and more,’ the teacher said to the students, b. ‘Otherwise, you will not cut a good figure in English’.

c. ‘Nazrul is not only the national poet of Bangladesh, father said to his son, ‘But also a rebel poet’.
d. ‘Most of the students of our college are weak in English,’ she said, ‘they are not sincere enough in English’.

b. She said to me, ‘What is your name. Where do you live?’
Answer: She asked me what my name was and also asked where I lived.

a. The man said to me, ‘Please, lend me some money. I shall return it to you tomorrow’.
b. I said to the little girl, ‘What is your name? What class do you read in?’
c. She said to me, ‘I sent the parcel to my mother yesterday. She will get it most probably tomorrow.’

c. Jhumu said to Mitu, ‘Are you going to Pabna tomorrow?’ ‘No, I have changed my decision,’ said Mitu.
Answer: Jhumu asked Mitu if she was going to Pabna the next day. Mitu replied in the negative that she had changed her decision.

d. The man said to his son, ‘Are you ill.’ ‘No, I am not ill,’ replied the son.
Answer: The man asked his son if he was ill. The son replied in the negative that he was not ill.

a. Rahim said to me, ‘yes, I shall go to your house tomorrow. Then I shall go my teacher’s house ’

b. ‘Yes, we will learn our lessons tomorrow,’ the students said to the teacher.

c. The rich man said to the villagers, ‘Yes, I shall establish a college in this village next year.’

c. The student replied, ‘No, I have not learnt my lessons today, Sir.’
Answer: The student respectfully replied in the negative that he had not learnt his lessons that day.
d. The man said, ‘Yes, Madam, I have completed the work.’
Answer: The man respectfully replied in the affirmative that he had completed the work.

a. ‘Yes, Sir, I came here yesterday,’ the labour said to his master, ‘I will go there again tomorrow.’
b. ‘No, Sir, I have not learnt my lessons today,’ the student said to the teacher, ‘I was ill yesterday and that is why I could not prepare my lessons.’
c. ‘Yes, madam, I will go to market tomorrow,’ the maid said to the mistress of the house, ‘Then I will inform you in detail about this matter .

a. The teacher said, ‘Dear students, you should be attentive in the class, otherwise, you will not be able to cut a good figure in the final examination.’
b. The man said to me, ‘Brother, will you help me to perform the work tomorrow?’

She said, “I have done my duty. She said that she had done her duty
Present Perfect Continuous Tense

Molly said, “I was reading.” Molly said that she had been reading.
Past Perfect Tense

Bellal said ti me, ”you had eaten” Bellal said to me that I had eaten.
Future Tense
She said to me, “I shall help you.” She said that she would help me
. According to Modal Verb:
Direct Indirect

Refat said, “I shall do the work.”
‘should’
Refat said that she would to the work.
‘Can’

Pritam said that he might go to school.
Wish, would, rather, sooner, it is high time এর পর unreal past tense অপরিবর্তিত থাকে।

If i were you, I should/would… ” দ্বারা উপদেশ বুঝালে indirect করার সময় subject+advise+object+to+reported speech এর verb বসে।
Direct: I said to him,” If i were you, i should wait”.
Indirect: I advised him to want.