A generating station which employs gas turbine as the prime mover for the generation of electrical energy is known as a gas turbine power plant. 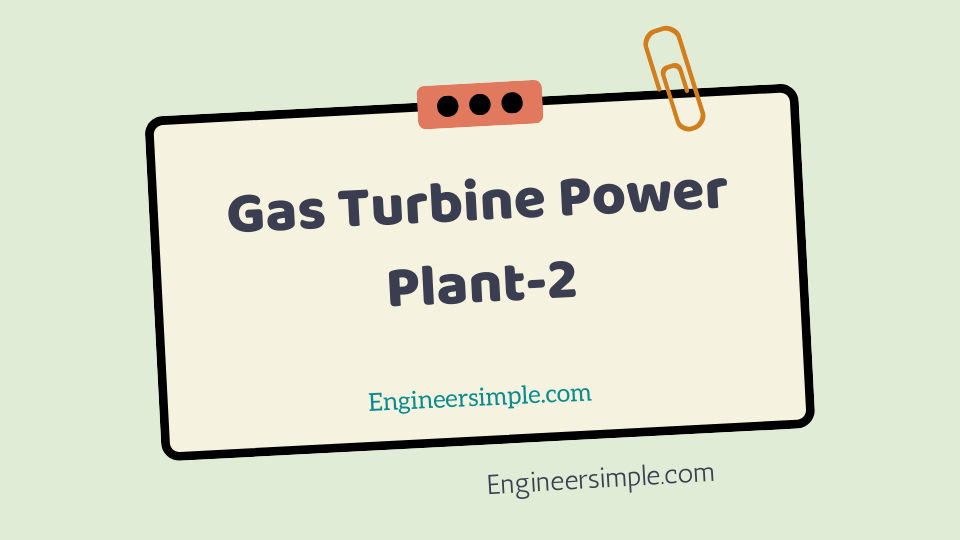 In a gas turbine power plant, air is used as the working fluid. The air is compressed by the compressor and is led to the combustion chamber where heat is added to air, thus raising its temperature. Heat is added to the compressed air either by burning fuel in the chamber or by the use of air heaters. The hot and high pressure air from the combustion chamber is then passed to the gas turbine where it expands and does the mechanical work. The gas turbine drives the alternator which converts mechanical energy into electrical energy.

It may be mentioned here that compressor, gas turbine and the alternator are mounted on the same shaft so that a part of mechanical power of the turbine can be utilised for the operation of the compressor. Gas turbine power plants are being used as standby plants for hydro-electric stations, as a starting plant for driving auxiliaries in power plants etc.

(i) It is simple in design as compared to steam power station since no boilers and their auxiliaries are required.

(ii) It is much smaller in size as compared to steam power station of the same capacity. This is expected since gas turbine power plant does not require boiler, feed water arrangement etc.

(iii) The initial and operating costs are much lower than that of equivalent steam power station.

(iv) It requires comparatively less water as no condenser is used.

(v) The maintenance charges are quite small.

(vi) Gas turbines are much simpler in construction and operation than steam turbines.

(vii) It can be started quickly form cold conditions.

(viii) There are no standby losses. However, in a steam power station, these losses occur because boiler is kept in operation even when the steam turbine is supplying no load.

(ii) Since a greater part of power developed by the turbine is used in driving the compressor, the net output is low.

(iii) The overall efficiency of such plants is low (about 20%) because the exhaust gases from the turbine contain sufficient heat.

(iv) The temperature of combustion chamber is quite high (3000oF) so that its life is comparatively reduced.

The main components of the plant are :

(iv) Gas turbine: The products of combustion consisting of a mixture of gases at high temperature and pressure are passed to the gas turbine. These gases in passing over the turbine blades expand and thus do the mechanical work. The temperature of the exhaust gases from the turbine is about 900oF.

(v) Alternator: The gas turbine is coupled to the alternator. The alternator converts mechanical energy of the turbine into electrical energy. The output from the alternator is given to the bus-bars through transformer, circuit breakers and isolators.

(vi) Starting motor: Before starting the turbine, compressor has to be started. For this purpose, an electric motor is mounted on the same shaft as that of the turbine. The motor is energized by the batteries. Once the unit starts, a part of mechanical power of the turbine drives the compressor and there is no need of motor now.