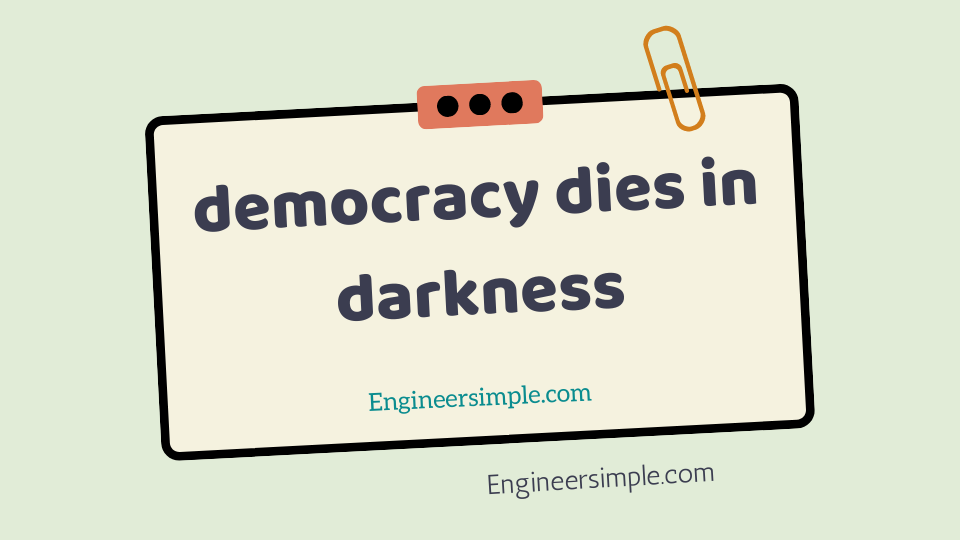 "Democracy Dies in Darkness" was the primary slogan to be officially adopt by the Post in its 140-year history.

consistent with the newspaper, the phrase was populariz by investigative journalist Bob Woodward.

Woodward used the phrase during a 2007 piece criticizing government secrecy. And referenced the phrase during a 2015 presentation at a conference. When he talked about The Last of the President's Men, his book about the Watergate . Woodward said he didn't coin the phrase himself, instead attributing the phrase to a judge ruling on a primary Amendment case, believed to be from Circuit Judge Damon Keith. The paper's owner Jeff Bezos, who attended Woodward's 2015 presentation, also used the phrase during a May 2016 interview.
The newspaper said it decided to adopt a politician slogan in 2016, before Donald Trump won the Republican nomination for president of the us .
This started a process which involved alittle group of newspaper employees meeting to develop ideas for slogans. The group eventually settled on "Democracy Dies in Darkness" after brainstorming over 500 options.
The slogan generated reaction on the web following its announcement.
On Twitter, writers at other media organizations mocked the slogan, while news agency ProPublica described the slogan as "awesome".]
Online magazine Slate said the slogan sounded "like a catchphrase more befitting a doomsday prophet than a daily newspaper", and compared the slogan to the titles of fifteen heavy metal albums, saying that they were "less dark" than the Washington Post slogan.
Merriam-Webster dictionary recorded a surge in searches for the word "democracy" after the newspaper adopted the slogan.