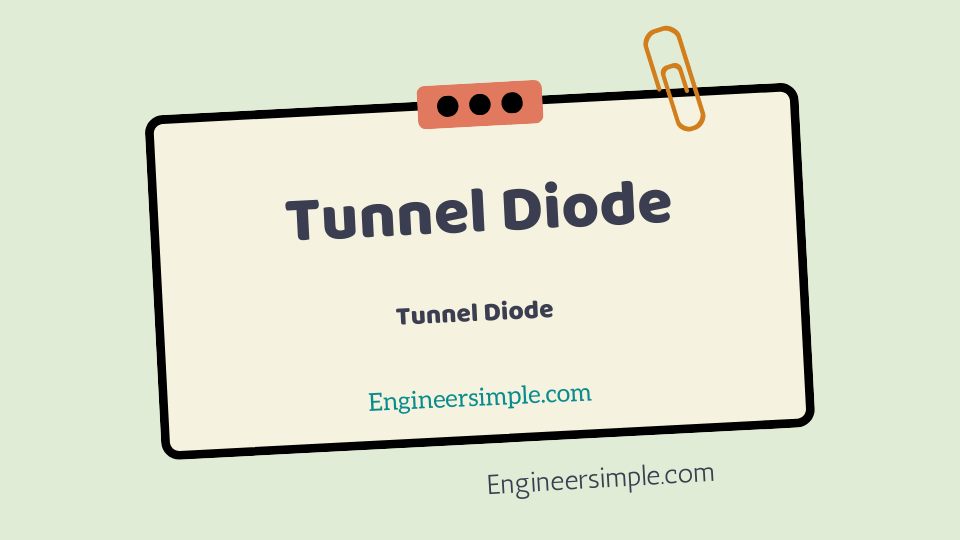 The tunnel diode is basically a pn junction with heavy doping of p-type
and p-type semiconductor materials. In fact, it is dope approximately
1000 times as heavily as a conventional diode. This heavy doping results in a large
number of majority carriers.

The heavy doping provides a large number of majority
carriers. Because of the large number of carriers, there is much drift activity in p and n
section. This causes many valence electrons to have their energy levels raised closer to
the conduction region. Therefore, it takes only a very small applied forward voltage to
cause conduction.

The movement of valence electrons from the valence energy band to the
conduction band with little or no applied forward voltage is call tunneling. Valence
electrons seem to tunnel through the forbidden energy band.

As the forward voltage is first increased, The diode current rises rapidly due to
tunneling effect. Soon the tunneling effect is reduce and current flow starts to decrease
as the forward voltage across the diode is increase. The tunnel diode is say to have
entered the negative resistance region. As the voltage is further increase, the tunneling
effect plays less and less part until a valley-point is reach. From now onwards, the
tunnel diode behaves as ordinary diode i.e, diode current increases with the increase in
forward voltage.

Fig.1(i) shows the V-I characteristic of a typical tunnel
diode.

(i) As the forward voltage across the tunnel diode is increased from zero,
electrons from the n-region “tunnel” through the potential barrier to the p-
region. As the forward voltage increases, the diode current also increases
until the peak-point P is reached. The diode current has now reached
peak current I P (= 2.2 mA) at about peak-point V p (=0.07 V). Until now the
diode has exhibited positive resistance.

(iii) When forward bias is increased beyond valley-point voltage V V (=0.7 V),
the tunnel diode behaves as a normal diode. In other words, from point V
onwards, the diode current increases with the increase in forward voltage
i.e the diode exhibits positive resistance once again. Fig.1(ii) shows
the symbol of tunnel diode. It may be note that a tunnel diode has a high
reverse current but operation under this condition is not generally used.