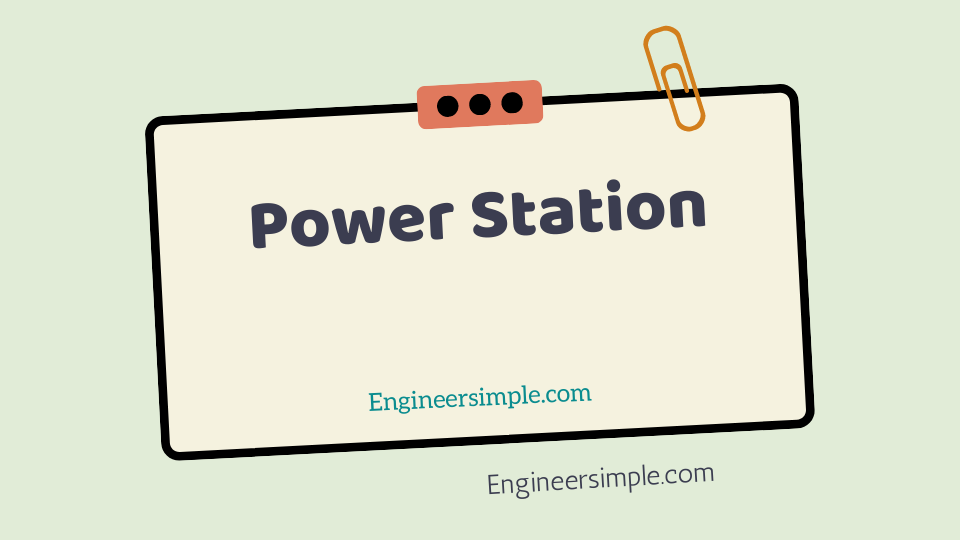 A generating station in which nuclear energy is converted into electrical energy is known as a nuclear power station.

In a nuclear power station, heavy elements such as Uranium (U235) or Thorium (Th232) are subjected to nuclear fission in a special apparatus known as a reactor. The heat energy thus released is utilize in raising steam at high temperature and pressure. The steam runs the steam turbine which converts steam energy into mechanical energy. The turbine drives the alternator which converts mechanical energy into electrical energy.

The most important feature of a nuclear power station is that a huge amount of electrical energy can be produced from a relatively small amount of nuclear fuel as compared to other conventional types of power stations. It has been found that complete fission of 1 kg of Uranium (U235) can produce as much energy as can be produced by the burning of 4,500 tons of high grade coal. Although the recovery of principal nuclear fuels (i.e., Uranium and Thorium) is difficult and expensive, yet the total energy content of the estimated world reserves of these fuels are considerably higher than those of conventional fuels, viz., coal, oil and gas. At present, energy crisis is gripping us and, therefore, nuclear energy can be successfully employed for producing low cost electrical energy on a large scale to meet the growing commercial and industrial demands.

(i) The amount of fuel required is quite small. Therefore, there is a considerable saving in the cost of fuel transportation.

(ii) A nuclear power plant requires less space as compared to any other type of the same size.

(iii) It has low running charges as a small amount of fuel is use for producing bulk electrical energy.

(iv) This type of plant is very economical for producing bulk electric power.

(v) It can be located near the load centers because it does not require large quantities of water and need not be near coal mines. Therefore, the cost of primary distribution is reduce.

(vi) There are large deposits of nuclear fuels available all over the world. Therefore, such plants can ensure a continue supply of electrical energy for thousands of years.

(vii) It ensures reliability of operation.

(i) The fuel used is expensive and is difficult to recover.

(ii) The capital cost on a nuclear plant is very high as compared to other types of plants.

(iii) The erection and commissioning of the plant requires greater technical know-how.

(iv) The fission by-products are generally radioactive and may cause a dangerous amount of radioactive pollution.

(v) Maintenance charges are high due to lack of standardisation. Moreover, high salaries of specially trained personnel employed to handle the plant further raise the cost.

(vi) Nuclear power plants are not well suit for varying loads as the reactor does not response to the load fluctuations efficiently.

(vii) The disposal of the by-products, which are radioactive, is a big problem. They have either to be dispose of in a deep trench or in a sea away from sea-shore.

Note: Fission: The breaking up of nuclei of heavy atoms into two nearly equal parts with release of huge amount of energy is know as nuclear fission. The release of the huge amount of energy during fission is due to mass defect i.e. the mass of the final product comes out to be less than the initial product. This mass defect is convert into heat energy according to Einstein’s relation, E = mc2.

The schematic arrangement of a nuclear power station is show in Fig. 2.7. The whole arrangement can be divide into the following main stages:

It is an apparatus in which nuclear fuel (U235) is subject to nuclear fission. It controls the chain reaction that starts once the fission is do. If the chain reaction is not controll, the result will be an explosion due to the fast increase in the energy released.

Cadmium is a strong neutron absorber and thus regulates the supply of neutrons for fission. When the control rods are push in deep enough, they absorb most of the fission neutrons, and hence few are available for chain reaction which, therefore, stops. However, as they are being withdraw, more and more of these fission neutrons cause fission, and hence the intensity of chain reaction (or heat produce) is increase. Therefore, by pulling out the control rods, the power of the nuclear reactor is increase, whereas by pushing them in, it is reduce. In actual practice, the lowering or raising of control rods is accomplish automatically according to the requirement of the load. The heat produced in the reactor is remove by the coolant, generally a sodium metal. The coolant carries the heat to the heat exchanger.

The coolant gives up heat to the heat exchanger which is utilise in raising the steam. After giving up heat, the coolant is again feed to the reactor.

(iv) Alternator: The steam turbine drives the alternator which converts mechanical energy into electrical energy. The output from the alternator is deliver to the bus-bars through the transformer, circuit breakers and isolators.

The following points should be keep in view while selecting the site for a nuclear power station :

(i) Availability of water: As sufficient water is require for cooling purposes, therefore, the plant site should be located where an ample quantity of water is available, e.g., across a river or by sea-side.

(ii) Disposal of waste: The waste produced by fission in a nuclear power station is generally radioactive which must be disposed of properly to avoid health hazards. The waste should either be buried in a deep trench or disposed of in the sea quite away from the seashore. Therefore, the site selected for such a plant should have adequate arrangements for the disposal of radioactive waste.

(iii) Distance from populated areas. The site selected for a nuclear power station should be quite away from the populated areas as there is a danger of the presence of radioactivity in the atmosphere near the plant. However, as a precautionary measure, a dome is used in the plant which does not allow the radioactivity to spread by wind or underground waterways.

(iv) Transportation facilities. The site selected for a nuclear power station should have adequate facilities in order to transport the heavy equipment during erection and to facilitate the movement of the workers employed in the plant. From the above-mentioned factors, it becomes apparent that the ideal choice for a nuclear power station would be near the sea or river and away from thickly populated areas.