The process by which the small and simple chemical units named monomer are linked together to produce a large molecule named polymer is known as polymerization. 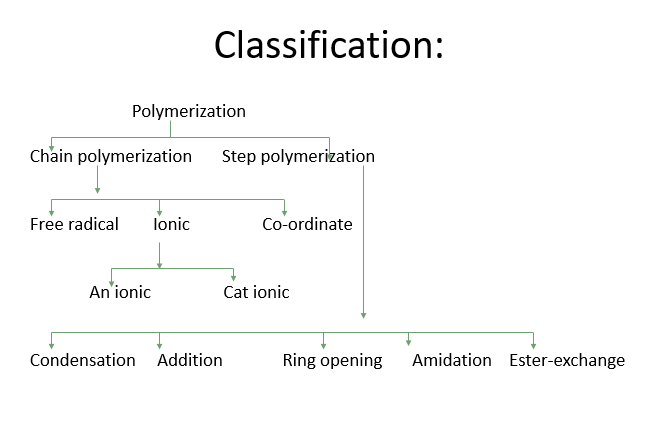 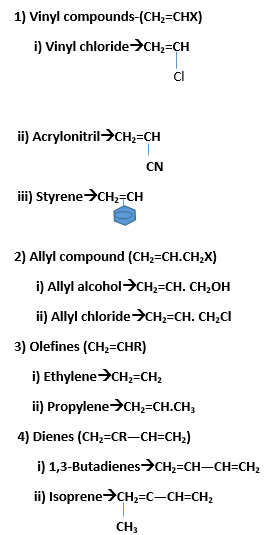 •       Free radical is an unpaired electron which initiate the polymerization. When energy such as heat, light or catalyst is applied to the initiators, then they are homolytically decomposed and produced free radical. If initiator is expressed by R:R,Then free radical is produced as follows:-

Initiators are thermally unstable chemical compounds which produce free-radical for the initiation of polymerization. When energy such as heat, light, catalyst or radiations are applied to the initiators, then they are homolytically decomposed and produce free radical which initiate the polymerization. If initiator is expreesed by R:R, Then free radical will be produced as follows:-

Most of the low molecular weight compound having azo group, hydro per oxides, per acides and per esters group are widely used as initiator.

There are several modes of addition in propagation of vinyl polymerization:

i) Heat to Heat

a) Termination by coupling mechanism:

•       In this case two large growing polymer chain come to each other and termination is occurred by the combination of activity of their free radical through the mutualisation to each other.

b) Termination by disproportionation

•           Inhibitor: The chemical substances which are used in killing the growth of polymer chain by combining with the active free radicals and forming either stable products or inactive free radical is called inhibitor. Hydroquinone, Nytrobenzene, Dinitrobenzene and Benzothiazine are mostly used as inhibitors.

•       Retarder: The material which slow down the growth of polymer chain is called retarder.It also decreases molecular weight of polymer. e.g. Dinitrobenzene.

Chain transfer agent: The compound which is used in chain transfer reaction is called C.T.A. If the C.T.A is present in large quantity, then the DP of produced polymer will be very low. Such polymer is called Telomer.

Most common co-catalyst is H2O.As the above catalysts can not active willingly, so water is applied as a co-catalyst to active them.

•       Cat-ionic polymerization is occurred in the following conditions:

•       1) INITIATION: At first catalyst reacts with co-catalyst and produce active catalyst. Then positive ion of active catalyst is transferred to monomer and generate a carbonium ion. It is called initiation.

•       In this case polymerization is stopped through the losing positive charge of growing polymer chain. It is called termination. Termination is occurred by the following two ways:

•       i) Termination is occurred by the rearrangement of cat-ion and an-ion, resulting unsaturated end group containing polymer is produced. As a result original complex acid is formed. Reaction is given bellow:

•       ii) Termination is occurred by the addition of cat-ion and an-ion in such a way, so that original catalyst is released.

•       Mostly used monomers in an-ionic polymerization are as follows: