The art of determining the per unit (i.e., one kWh) cost of production of electrical energy is known as economics of power generation. 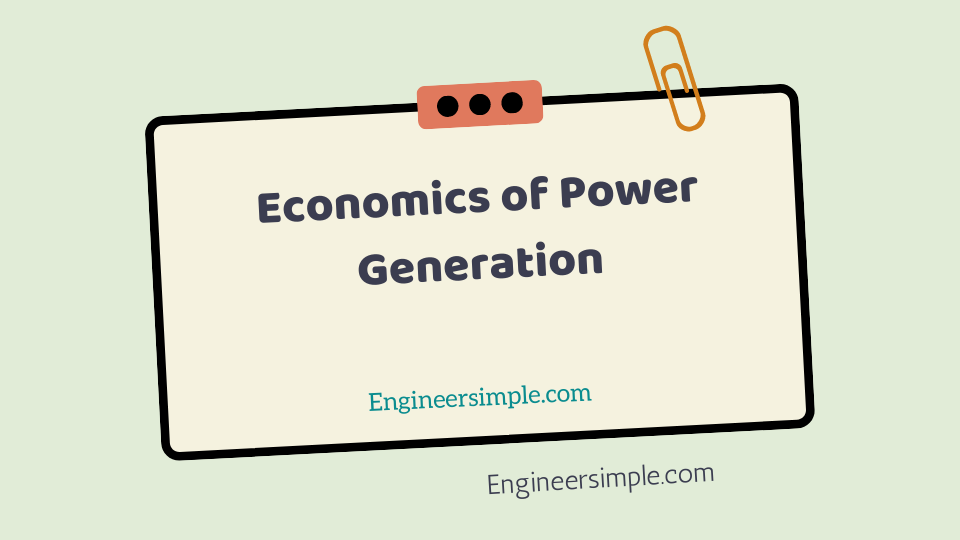 The economics of power generation has assumed a great importance in this fast developing power plant engineering. A consumer will use electric power only if it is supplied at reasonable rate. Therefore, power engineers have to find convenient methods to produce electric power as cheap as possible so that consumers are tempted to use electrical methods. Before passing on to the subject further, it is desirable that the readers get themselves acquainted with the following terms much used in the economics of power generation :

The cost of use of money is known as interest.

A power station is constructed by investing a huge capital. This money is generally borrowed from banks or other financial institutions and the supply company has to pay the annual interest on this amount. Even if company has spent out of its reserve funds, the interest must be still allowed for, since this amount could have earned interest if deposited in a bank. Therefore, while calculating the cost of production of electrical energy, the interest payable on the capital investment must be included. The rate of interest depends upon market position and other factors, and may vary from 4% to 8% per annum.

The decrease in the value of the power plant equipment and building due to constant use is known as depreciation.

If the power station equipment were to last for ever, then interest on the capital investment would have been the only charge to be made. However, in actual practice, every power station has a useful life ranging from fifty to sixty years. From the time the power station is installed, its equipment steadily deteriorates due to wear and tear so that there is a gradual reduction in the value of the plant. This reduction in the value of plant every year is known as annual depreciation. Due to depreciation, the plant has to be replaced by the new one after its useful life. Therefore, suitable amount must be set aside every year so that by the time the plant retires, the collected amount by way of depreciation equals the cost of replacement. It becomes obvious that while determining the cost of production, annual depreciation charges must be included.

The total cost of electrical energy generated can be divided into three parts, namely;

It is the cost which is independent of maximum demand and units generated.

The fixed cost is due to the annual cost of central organization, interest on capital cost of land and salaries of high officials. The annual expenditure on the central organization and salaries of high officials is fixed since it has to be met whether the plant has high or low maximum demand or it generates less or more units. Further, the capital investment on the land is fixed and hence the amount of interest is also fixed.

It is the cost which depends upon maximum demand but is independent of units generated.

It is the cost which depends only upon the number of units generated.

The running cost is on account of annual cost of fuel, lubricating oil, maintenance, repairs and salaries of operating staff. Since these charges depend upon the energy output, the running cost is directly proportional to the number of units generated by the station. In other words, if the power station generates more units, it will have higher running cost and vice-versa.

Expressions for Cost of Electrical Energy

The overall annual cost of electrical energy generated by a power station can be expressed in two forms viz three part form and two part form.

b = constant which when multiplied by maximum kW demand on the station gives the annual semi-fixed cost.

c = a constant which when multiplied by kWh output per annum gives the annual running cost.

A = a constant which when multiplied by maximum kW demand on the station gives the annual cost of the first part.

B = a constant which when multiplied by the annual kWh generated gives the annual running cost.

It is interesting to see here that two-part form is a simplification of three-part form. A little reflection shows that constant “a” of the three part form has been merged in fixed sum per kW maximum demand (i.e. constant A) in the two-part form.

There is reduction in the value of the equipment and other property of the plant every year due to depreciation. Therefore, a suitable amount (known as depreciation charge) must be set aside annually so that by the time the life span of the plant is over, the collected amount equals the cost of replacement of the plant.

The following are the commonly used methods for determining the annual depreciation charge:

In general, the annual depreciation charge on the straight line method may be expressed as:

S = Scrap or salvage value after the useful life of the plant.

Suppose the annual unit depreciation is x. It is desired to find the value of x in terms of P, n and S.

But the value of equipment after n years (i.e., useful life) is equal to the scrap value S.

From exp. (i), the annual depreciation can be easily found. Thus depreciation to be made for the first year is given by :

Depreciation for the first year = xP

Similarly, annual depreciation charge for the subsequent years can be calculated.

r = Annual rate of interest expressed as a decimal

Let us suppose that an amount of q is set aside as depreciation charge every year and interest compounded on it so that an amount of P− S is available after n years. An amount q at annual interest rate of r will become q(1 + r)n at the end of n years.

Amount q deposited at the end of first year becomes

Amount q deposited at the end of 2nd year becomes

Amount q deposited at the end of 3rd year becomes

This is a G.P. series and its sum is given by:

This total fund must be equal to the cost of replacement of equipment i.e., P − S.

The value of q gives the uniform annual depreciation charge. The paraenthetical term in eq. (i) is frequently referred to as the “sinking fund factor”.

Though this method does not find very frequent application in practical depreciation accounting, it is the fundamental method in making economy studies.

The load factor plays a vital role in determining the cost of energy. Some important advantages of high load factor are listed below: