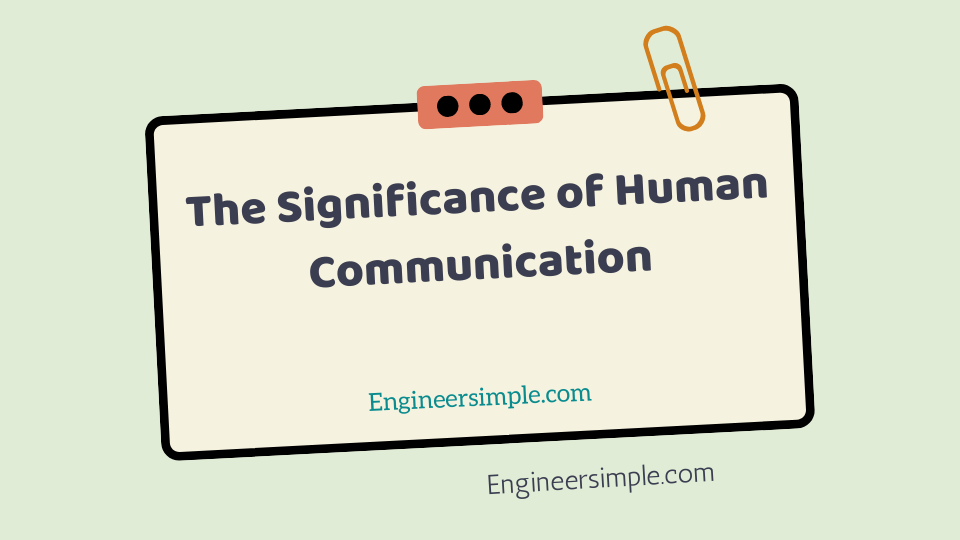 Two of the main barriers to human communication are language and distance. Language barriers arise between persons of different cultures or nationalities. Communicating over long distances is another problem. Communication between early human beings was limited to face-to-face encounters. Long-distance communication was first accomplished by sending simple signals such as drumbeats, horn blasts, and smoke signals and later by waving signal flags (semaphores). When messages were relayed from one location to another, even greater distances could be covered The Significance of Human Communication.

The distance over which communication could be sent was extended by the written word. For many years, long-distance communication was limited to the sending of verbal or written messages by human runner, horseback, ship, and later trains. Human communication took a dramatic leap forward in the late nineteenth century when electricity was discovered and its many applications were explored. The telegraph was invented in 1844 and the telephone in 1876. Radio was discovered in 1887 and demonstrated in 1895 The Significance of Human Communication.

Well-known forms of electronic communication, such as the telephone, radio, TV, and the Internet, have increased our ability to share information. The way we do things and the success of our work and personal lives are directly related to how well we communicate. It has been said that the emphasis in our society has now shifted from that of manufacturing and mass production of goods to the accumulation, packaging, and exchange of information. Ours is an information society, and a key part of it is communication.

Without electronic communication, we could not access and apply the available information in a timely way The Significance of Human Communication.

This article is about electronic communication, and how electrical and electronic principles, components, circuits, equipment, and systems facilitate and improve our ability to communicate. Rapid communication is critical in our very fast-paced world. It is also addictive. Once we adopt and get used to any form of electronic communication, we become hooked on its benefits. In fact, we cannot imagine conducting our lives or our businesses without it. Just imagine our world without the telephone, radio, e-mail, television, cell phones, tablets, or computer networking The Significance of Human Communication.

Note:Marconi is generally credited with inventing radio, but he did not. Although he was a key developer and the first deployer of radio, the real credit goes to Heinrich Hertz, who fi rst discovered radio waves, and Nicola Tesla, who first developed real radio applications The Significance of Human Communication.

Figure 1-2 A general model of all communication systems.

The first step in sending a message is to convert it into electronic form suitable for transmission. For voice messages, a microphone is used to translate the sound into an electronic audio signal. For TV, a camera converts the light information in the scene to a video signal. In computer systems, the message is typed on a keyboard and converted to binary codes that can be stored in memory or transmitted serially. Transducers convert physical characteristics (temperature, pressure, light intensity, and so on) into electrical signals.

The transmitter itself is a collection of electronic components and circuits designed to convert the electrical signal to a signal suitable for transmission over a given communication medium. Transmitters are made up of oscillators, amplifiers, tuned circuits and filters, modulators, frequency mixers, frequency synthesizers, and other circuits. The original intelligence signal usually modulates a higher-frequency carrier sine wave generated by the transmitter, and the combination is raised in amplitude by power amplifyers, resulting in a signal that is compatible with the selected transmission medium The Significance of Human Communication.

The communication channel is the medium by which the electronic signal is sent from one place to another. Many different types of media are used in communication systems, including wire conductors, fi ber-optic cable, and free space.

Electrical Conductors: In its simplest form, the medium may simply be a pair of wires that carry a voice signal from a microphone to a headset. It may be a coaxial cable such as that used to carry cable TV signals. Or it may be a twisted-pair cable used in a local-area network (LAN).

Optical Media: The communication medium may also be a fiber-optic cable or “light pipe” that carries the message on a light wave. These are widely used today to carry long-distance calls and all Internet communications. The information is converted to digital form that can be used to turn a laser diode off and on at high speeds. Alternatively, audio or video analog signals can be used to vary the amplitude of the light The Significance of Human Communication.

Free Space: When free space is the medium, the resulting system is known as radio. Also known as wireless, radio is the broad general term applied to any form of wireless communication from one point to another. Radio makes use of the electromagnetic spectrum. Intelligence signals are converted to electric and magnetic fields that propagate nearly instantaneously through space over long distances. Communication by visible or infrared light also occurs in free space.

Other Types of Media: Although the most widely used media are conducting cables and free space (radio), other types of media are used in special communication systems. For example, in sonar, water is used as the medium. Passive sonar “listens” for underwater sounds with sensitive hydrophones. Active sonar uses an echo-reflecting technique similar to that used in radar for determining how far away objects under water are and in what direction they are moving The Significance of Human Communication.

The earth itself can be used as a communication medium, because it conducts electricity and can also carry low-frequency sound waves. Alternating-current (ac) power lines, the electrical conductors that carry the power to operate virtually all our electrical and electronic devices, can also be used as communication channels. The signals to be transmitted are simply superimposed on or added to the power line voltage. This is known as carrier current transmission or power line communications (PLC). It is used for some types of remote control of electrical equipment and in some LANs.

A receiver is a collection of electronic components and circuits that accepts the transmitted message from the channel and converts it back to a form understandable by humans. Receivers contain amplifi ers, oscillators, mixers, tuned circuits and filters, and a demodulator or detector that recovers the original intelligence signal from the modulated carrier. The output is the original signal, which is then read out or displayed. It may be a voice signal sent to a speaker, a video signal that is fed to an LCD screen for display, or binary data that is received by a computer and then printed out or displayed on a video monitor The Significance of Human Communication.

Most electronic communication is two-way, and so both parties must have both a transmitter and a receiver. As a result, most communication equipment incorporates circuits that both send and receive. These units are commonly referred to as transceivers. All the transmitter and receiver circuits are packaged within a single housing and usually share some common circuits such as the power supply. Telephones, handheld radios, cellular telephones, and computer modems are examples of transceivers The Significance of Human Communication.

Signal attenuation, or degradation, is inevitable no matter what the medium of transmission. Attenuation is proportional to the square of the distance between the transmitter and receiver. Media are also frequency-selective, in that a given medium will act as a low-pass filter to a transmitted signal, distorting digital pulses in addition to greatly reducing signal amplitude over long distances. Thus considerable signal amplification, in both the transmitter and the receiver, is required for successful transmission. Any medium also slows signal propagation to a speed slower than the speed of light.

Noise is mentioned here because it is the bane of all electronic communications. Its effect is experienced in the receiver part of any communications system. For that reason, we cover noise at that more appropriate time in Chapter 9. While some noise can be filtered out, the general way to minimize noise is to use components that contribute less noise and to lower their temperatures. The measure of noise is usually expressed in terms of the signal-to-noise (S/N) ratio (SNR), which is the signal power divided by the noise power and can be stated numerically or in terms of decibels (dB). Obviously, a very high SNR is preferred for best performance.

Electronic communications are classified according to whether they are (1) one-way (simplex) or two-way (full duplex or half duplex) transmissions and (2) analog or digital signals.

An analog signal is a smoothly and continuously varying voltage or current. Some typical analog signals are shown in Fig. 1-5. A sine wave is a single-frequency analog signal. Voice and video voltages are analog signals that vary in accordance with the sound or light variations that are analogous to the information being transmitted.

Digital signals, in contrast to analog signals, do not vary continuously, but change in steps or in discrete increments. Most digital signals use binary or two-state codes. Some examples are shown in Fig. 1-6. The earliest forms of both wire and radio communication used a type of on/off digital code. The telegraph used Morse code, with its system of short and long signals (dots and dashes) to designate letters and numbers. See Fig. 1-6(a). In radio telegraphy, also known as continuous-wave (CW) transmission, a sine wave signal is turned off and on for short or long durations to represent the dots and dashes. Refer to Fig. 1-6(b).

Many transmissions are of signals that originate in digital form, e.g., telegraphy messages or computer data, but that must be converted to analog form to match the transmission medium. An example is the transmission of digital data over the telephone network, which was designed to handle analog voice signals only. If the digital data is converted to analog signals, such as tones in the audio frequency range, it can be transmitted over the telephone network. Analog signals can also be transmitted digitally. It is very common today to take voice or video analog signals and digitize them with an analog-to-digital (A /D) converter. The data can then be transmitted efficiently in digital form and processed by computers and other digital circuits.