Solar Power System Being situated in the northeastern side of south Asia, Bangladesh possesses a sun hour of 2,500 approx, per year.
Its daily average solar radiation range is 4.5-5.5 kW/m². Therefore, Bangladesh is a mediocre country in respect of receiving solar energy. This energy can be converted into solar photovoltaic or solar thermal energy. Though the country’s weather is hot and moderately humid, solar thermal energy is not as promising as solar photovoltaic energy here. According to the geographical position of Bangladesh, the southern portions are more feasible and are considered better energy-oriented than that other parts of the country. 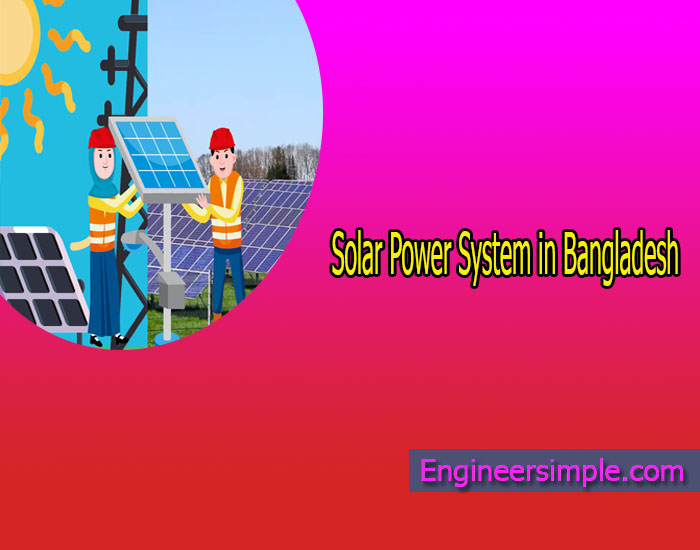 In the role of a power-hungry country, solar power plants and solar parks are both becoming popular in the last decade. Besides, the government of Bangladesh has set a policy of having a 10% share of total electricity generation from renewable energy by the end of 2021.

Following this trend, the first-ever grid-tied solar power plant was installed in 2017 with a nameplate capacity of 3.3MWp at Jamalpur, Sarishabari under a power purchase agreement (PPA) with Bangladesh Power Development Board (BPDB). After that, a significant amount of solar power plants have been integrated with the grid such as a 20MW (AC) Solar Park at Teknaf, 8MW Solar Park at Panchagarh, 7.4MW Grid-connected Solar PV Power Plant at Kaptai, 50MW (AC) Solar Park at Mymensingh and many more. An aggregated amount of approx. 2230 MW of electricity is coming from around 47 nos of on-grid solar parks till now.

It is well noted that approx 3 acres per MW of solar power system is generally required for land to accumulate the number of solar panels designed for a system. Approximately 60 tk per kilowatt is the cost that comprises everything included in this ground-mounted system.

Apart from ground-mounted solar parks, on-grid or off-grid roof-top solar power systems are very popular these days. The unused space of the building at the rooftop is considered as the installed place for solar panels. Industrial sheds or tin sheds can be also considered for the same which saves the cultivated or uncultivated land to be used for other purposes. A survey held by Dhaka university states that around six gigawatts of electricity generation. is possible from the roof-top by solar power system in our country. This is undoubtedly delightful information for us if we can take further steps for it. A piece of very upsetting news is that off-grid solar power systems. That is considered for no use and is becoming less popular than the on-grid system. This reason for fostering grid-connected solar-powered systems is triggered by implementing the net metering guidelines in 2018.

Previously city dwellers were forced to install solar panels on their rooftops only to get a permit for electricity connection for newly constructed buildings from the electricity service provider. But this scenario has been changed after implementing the net energy metering guidelines. Which is not only offering economic comfort to the consumers but also the proper utilization of the installed system. Another reason for the popularity of this system is the zero demand for land for the installation of solar panels. Which is merely a blessing for a densely populated city. On top of these, net metering or net energy metering has stepped forward to help the government to achieve sustainable development goals by 2030.

Generally, rooftop solar-powered systems consist of solar panels, inverter, battery (in case of storage required), cables, protective devices, etc. Depending on the country of origin and manufacturers (i.e. USA, Germany, China) of solar panels, and inverters. For other accessories, the price of the system ranges from 50-60tk per kilowatt to complete a system. If the capacity of the system increases, the total price per kilowatt reduces consecutively. The total price per kilowatt is also dependent on the import duties of inverters. A reasonable amount was canceled in the 2021-22 budget.

The cost of the solar-powered system is getting affordable day by day. So we can hope that the country will be able to achieve sustainable development goal 7. That refers to the access to electricity to 100% population by implementing more and more renewable energy share.