Air Conditioning system: How does it work?

Air Conditioning system: How does it work?

Air conditioner is one of the most luxurious modern appliances. Its working principle is very interesting. It helps to maintain the room temperature to the optimum level. Not only that, it also helps to remove airborne particles and the humidity from the room. 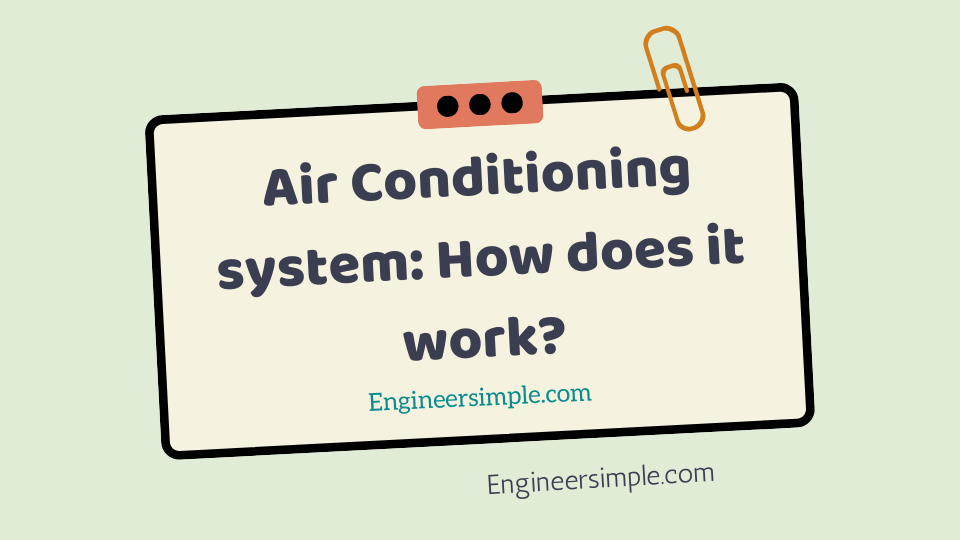 To understand how an Air Conditioning system works, one needs to understand the following thermodynamic phenomena:

2.Boiling point of a liquid depends on both temperature and surrounding pressure. Water boils at 100℃ / 1 bar atm pressure. If you lower the atm pressure below 1 bar, it will boil at less than 100℃.

3.When a liquid ABSORBS heat, it EVAPORATES. When vapor releases heat, it CONDENSES.

4.If a liquid is compress, the pressure increases, temperature increases while volume decreases. So , when the refrigerant (liquid+vapor) gets into the evaporator (inside the house ) , it absorbs the heat from that room , hence , it evaporates. Now, in order for condensation to occur in the Condenser(outside the house), the now vapor refrigerant(hot) needs to be hotter than the outside air so that to give away the heat (see point 1 and 3 from above) and condense (become liquid again). For this to happen, the compressor compresses the vapor refrigerant thus increasing its temperature (see point 4 ) .

When the compressed vapor refrigerant enters the condenser , it releases some of the heat into the surrounding air which has a lower temperature ( see point 1 ), and transforms into a liquid ( condensation ) .

The liquid now passes through an expansion valve ,where its pressure is reduce and the liquid begins to boil (SOME vapors form)  thus releasing some of its energy (heat) becoming even colder. Now we have a mix of cold liquid plus vapor ready to repeat the cycle .

Now let's learn how the air conditioning system works. Actually it has two connect coils with continuously flowing refrigerant fluids inside them.

And to the condenser hot, more specifically, hotter than the surroundings or environment. With these conditions, the continuously flowing fluids will certainly absorb the heat from the room and eject it out to the surroundings. This is call the fundamental rule of the air conditioner.

To achieve these objectives, two more components are also need for this system. A compressor and an expansion valve.

In the actual air conditioner, the compressor sits near the condenser and the expansion valve sits near to the evaporator. There are some practical issues also. Near the evaporator coil, the temperature is quite low. This will lead to water condensation on the evaporator coils. That's why we need a pipe to remove the condensation water. An interesting design challenge is that a compressor is design to handle only vapor and a small fraction of liquid content can affect its performance and can damage it severely. For this reason, it is mandatory that the evaporator should convert all the liquid into vapor and even increase the temperature of the refrigerant by 5℃ to 8℃ after the conversion.

This is assure by a special kind of expansion valve called the thermostatic expansion valve (TXV). Inside the TXV, the bulb controls the needle. This bulb is connect at the evaporator exits. The refrigerant inside the bulb is separated from the main refrigerant cycle by a diaphragm. It works with a restriction that the narrower the diaphragm is, the cooler the outlet refrigerant will be.

Modern air conditioners use scroll compressors instead of the reciprocating type. This technology also uses variable motor technology called inverter technology. For better temperature control. By adjusting the motor speed; the compressor speed, flow rate and the cooling capacity can be controlled. There is a terminology called “ton” associated with the air conditioner. Ton represents how much heat an evaporator can absorb from the room. It is actually the refrigerant’s heat removal capability. (Ton= Qabsorbed, 1 Ton = 3517W).