A generator converts mechanical energy into electrical energy, which is just opposite of a machine’s principle. Therefore, a generator provides direct current by using this principle is called DC generator. Previously it was known as dynamo. Dynamo is a Greek word that means “power”. 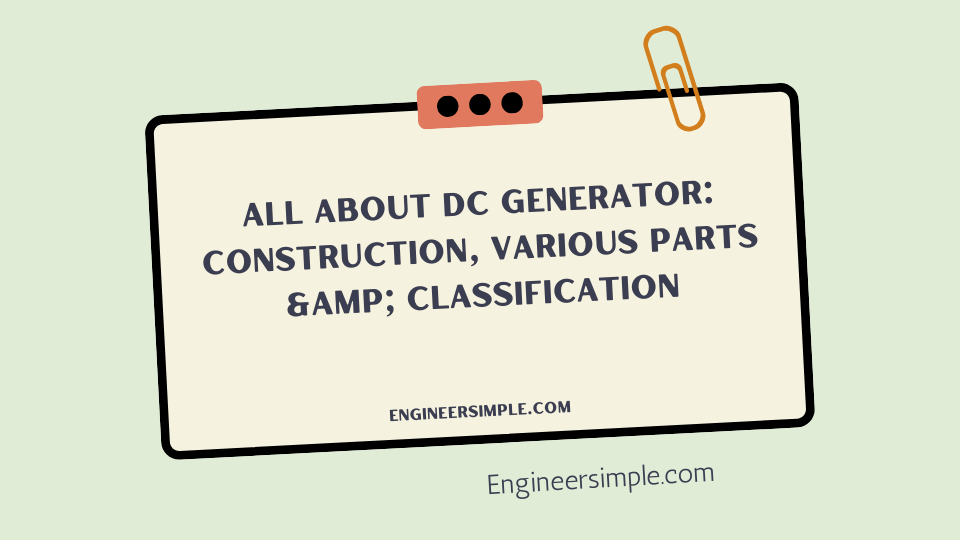 To understand the basic principle of a dc generator, we have to learn about emf (electromotive force) or voltage. As described above, a dc generator converts one form of energy into another form. To do this conversion, a magnetic field and an armature are required. Top portion of the armature contains a coil which is rotated in the magnetic field with the help of mechanical force. A component called prime mover does this task which is a very important part of a dc generator.

Now let’s come to the emf which is known as the electrical force perceived by the conductor of the armature coil in a rotating magnetic field. Thus the way a dc generator works on the basic principle.

The constructional parts of a dc generator are as follows:

In respect of electrical and magnetic parts, all kinds of dc generators or even dc motors are consisted of two categories-

A. Magnetic parts are mainly constructed with the following components-

B. Electrical parts are included with below components-

The functions of various parts of dc generator is described below:

It is actually the outer part of the dc generator that acts as a canopy. It houses the poles and the bearings. Yoke is made of cast iron to serve the purpose for smaller machines. However, for larger machines, steel sheets are used for it. The legs are welded with the frame along with the terminal block.

Generally electromagnet is used as magnetic poles in dc generators. Pole cores are made of laminated steel sheets or thin sheets. The shapes are of rectangular form. Nut bolts are used to screw these sheets with the frame. The front side of the pole core which is placed close to the armature.

In the middle of a dc generator, there is a cylinder shaped component. It is easily rotatable and both sides of this cylinder are fixed with bearings. It is made of thin Silicon sheet layers. Silicon varnish is given between each layer of these sheets. Thickness of these sheets are generally 0.35-0.50mm. It is known as the armature core. All these sheets are joined together with nut-bolts and an armature core is prepared in this way. Air holes are made through the core. The outside of the core is dovetail shaped which helps to house the field winding, to ease the movement of magnetic flux and thus to produce emf. The laminated sheets help to increase the permeability and to reduce the eddy current loss.

The slight gap between pole core and armature is called air gap. It helps the armature to rotate without friction. But this air gap should be optimum. If it is more than the requirement of armature rotation, it reduces the permeability of air which then creates hindrances for the flux. Air gap should be the same everywhere. Otherwise, the produced emf could be unequal.

To make the pole core into electromagnet, some conductive coil is twisted around it. These are called field coils. A dc generator can consist of many of these coils. Such field coils can be made of super enamel copper wire having numerous turns. The direction of the magnetic field depends upon the direction of the turns of these coils, both of which must be the same.

The produced voltage and current in a generator is ac (altering current). To convert it into dc (direct current), a device is introduced in a dc generator. This device is known as a commutator. Thick bronze sheets are connected one after another to give a cylindrical shape to make up a commutator. Each of these sheets are called segments. One segment is isolated from another by insulation materials. The reason for this is to separate the produced current from each segment from going to other segments.

Altering current produced in armature is converted into dc form. To convey this current in the outer circuit, a rectangular component is needed. This is called a brush which is made of carbon. Brush is connected to the commutator which is always rotating. The number of brushes is equal to the number of poles for lap winding. And for wave winding, it is double in number.

The armature and the commutator are situated on the shaft. Bearing causes the shaft to rotate easily with less friction. According to the purpose of the generator, ball bearings or roller bearings are used.

A dc field supply is required for the dc generator to produce a magnetic field. This process is known as excitation for dc generators.

According to field excitation, dc generator is classified as -

B. Self excited generator

Self excited generator is then classified as-

DC generator is used in multi purpose field such as-

a. They are used where speed control is an important issue.

b. As they are known as dynamos; so they can be used in by-cycle and even motorcycle where tiny is power required