Turlough Hill Power Station is an open-loop pumped storage hydroelectric power station located in County Wicklow, Ireland. That was the biggest civil engineering project ever carried out in Ireland. It is the only such plant in the country and one of the only plants on the entire island of Ireland. Turlough Hill has been providing reliable electricity to Irish households for nearly 50 years. 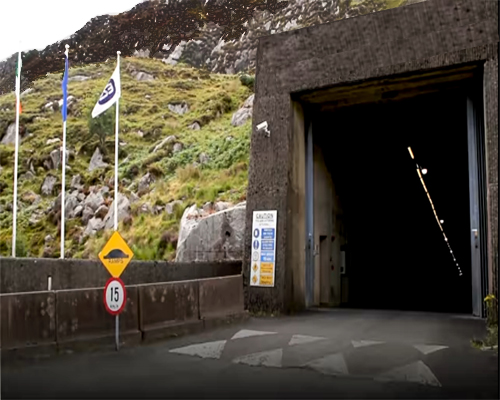 In the early 1960s, ESB planned the construction of this station for purely economic reasons. The station would displace high-cost generating plants at peak demand periods with energy generated from water pumped at low cost during off-peak times.

After an extensive examination of the available locations, it was ideal for the project. The height of the location at 700 meters above sea level. In spite of that height disadvantage, this was outweighed by the fact that it was so close to Dublin City.

On the site in 1968, 1 million tons of peat were removed from the crown of the hill. The upper lake was formed by removing the hill's apex to form a flatbed while using the quarried stone to build a surrounding embankment. More than 300,000 tons of granite were excavated in the construction of the tunnel. This rock now forms the base for the outdoor switching station which handles the power at 2,200,000 volts at the time of construction.

The construction of this pumped storage power station began in 1968 and finished in 1974. It was named by the son name of Dermot O’Riordan, the former Deputy Chief Civil Engineer with ESB.

The opening date of this hydroelectric power station was 12 July 1974. In 2009, the ESB (Electricity Supply Board) undertook modifications to extend the life span of a station. Colt, in collaboration with Powergen Safety Services, designed a pressurisation system to prevent fire from blocking the escape stairway at the station. This system would ensure that people could still access the means of escape in the event of a fire.

Turlough Hill Power Station is located in County Wicklow, Ireland, approximately 25km south of Dublin. The geographical coordinate is 53°01′43″N 6°24′23″W. The plant is situated 500 metres inside the hill.

The station is the only pumped storage hydroelectric power station in Ireland which is also used to provide system operating reserves and helps to ensure supply security during periods of peak demand.

The Irish Company ESBI or ESB International is the main contractor of this project.

The station consists of two lakes one a natural lake and the other an artificial lake built 286 metres above at the top of Turlough Hill. The generating plant is built into the mountain with a large diameter pipe connecting the two lakes at night and during periods of light demand energy from other low-cost. The lower reservoir creates the Lough Nahanagan lake. By using surplus power during periods of low demand, turbines pump up water from the lower reservoir to the upper reservoir.

The power station consists of four turbines that can generate up to (4 x 73 MW) 292MW when operating at total capacity.

ESB generating stations are used to pump water from the lower natural lake to the upper man-made lake where it is stored then during peak load when generating costs are high.

In this way, Turlough Hill can take over generation from more expensive plants and provide fast and flexible reserves for an expected demand on the system.

At full load with the upper lake full, the station can generate 292 megawatts for four and a half hours. At night the upper lake is refilled taking six hours to filter capacity if it has been emptied.

It can still provide a reserve for the system by shedding one or more pumps, each giving 68 megawatts of power back to the system or in extreme circumstances.

It can switch to generator mode in just over 2 minutes. There is usually at least one set not pumping and ready to start generating within 15 seconds.

A large access tunnel was constructed to service the cavern which houses the generating hall situated over 300 metres below the top of the hill. From there work began on the tunnel to house, the enormous pipe is known as the pressure shaft, at the same time the crew at the top of the hill began to excavate down.

The total tunnelling for the pressure shaft was over 600 meters in length. The five meter diameter pressure shaft was lowered into place on rails in 10 meter sections. Delicate welding of the sections were checked ultrasonically to ensure that the shaft would withstand the force of five thousand tons of water a minute, driving the turbines 300 metres below. When the construction element of the project was completed a sealing layer of asphalt was applied covering the 40 acre surface of the lake bottom. 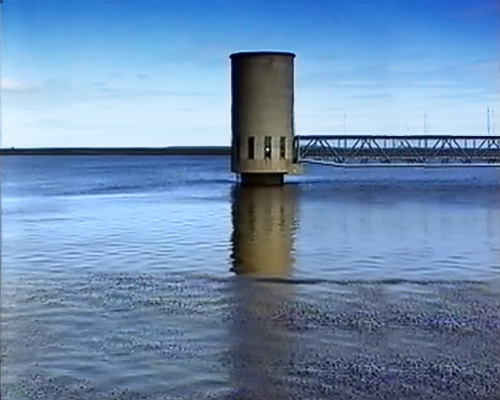 A road leading to the lakes bed was built for maintenance purposes. The mechanism which controls the flow of water in and out of the Upper Lake, is housed in a tower which becomes an island when there Is water in the lake. So, a tubular steel bridge mounted on rubber cushions was installed for access. 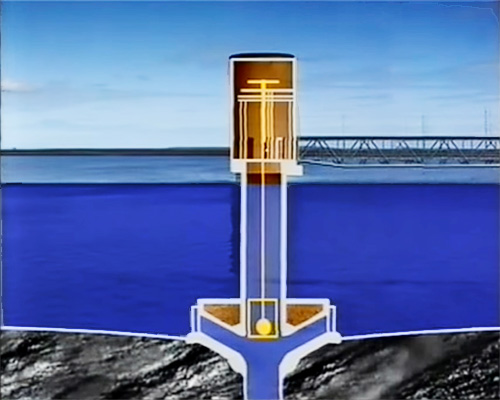 The tower contains a servo motor which lifts and lowers a cylindrical gate. In an emergency situation this will operate automatically even at maximum flow. 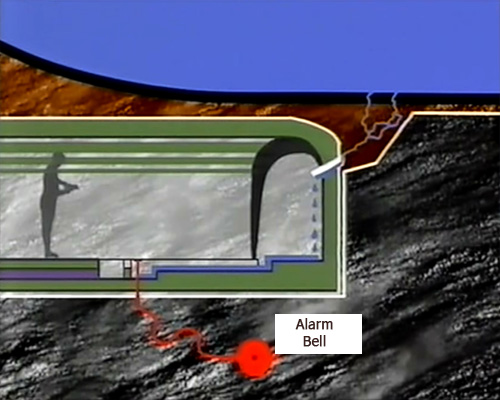 Special access tunnels were constructed below the lake to monitor any seepage from the 2.3 million cubic meters of water above. These have been fitted with automatic sensors to detect any unusual activity. 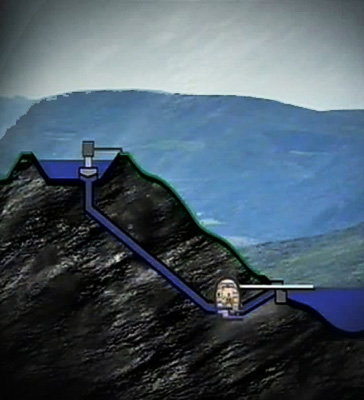 In addition, movement detectors were built into the embankment to give early warning of any settlement. To date the technical performance of the upper lake has been excellent. Once the construction was complete, the heavy plant was installed in the cavern. 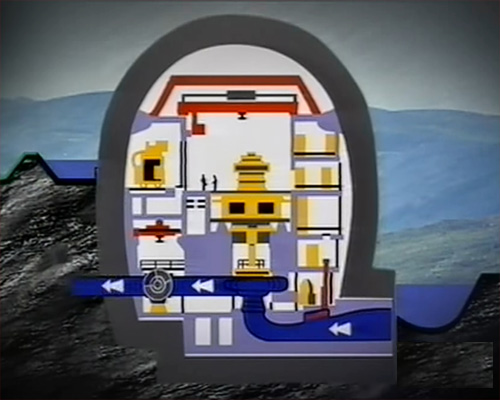 This is situated 15 metres below the low water level of the lower lake. This was necessary to provide priming pump pressure for the machines when in pump mode. However this also necessitates special precautions to avoid any risk of flooding the cavern. The ventilation tunnel at a high level provides an emergency escape road. In addition the station has its own emergency power generators.

Massive spherical valves are located at the inlet to each turbine to control water flow. These were designed to open and close in about a minute but have since been modified by ESP engineers to operate in less than 15 seconds. They can if necessary intercept the full turbine flow absorbing the force of over 290 tons. Each one of the for generating sets has a dual function as a generator and in Reverse mode as a pump to refill the upper lake. During normal peak load operation, ESB usually has at least one set spinning at full speed ready to come on stream. 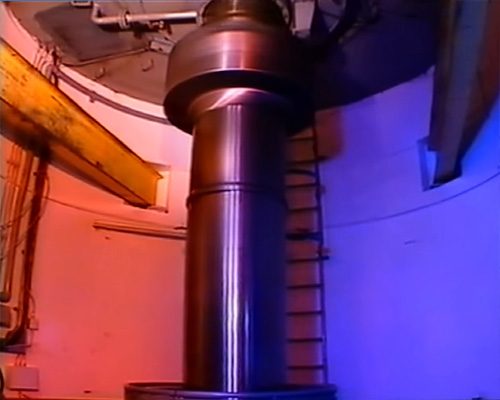 This is known as spinning reserve. This generator should be required the computer at the national control center, will automatically bring it on stream and trigger the startup sequence for the next available set to take up standby operation. in severe cases all four sets will be run up to speed ready to generate within 15 seconds. 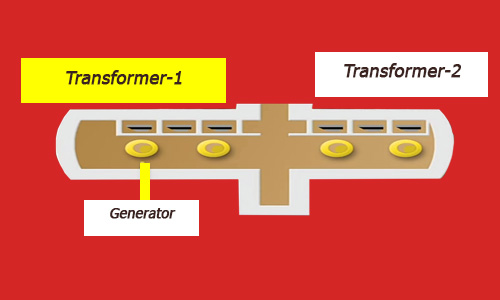 Generating sets feed 670 tonnes single-phase transformers which are grouped into two three phase units. These step up the voltage to two hundred and twenty thousand volts. The power is then fed into the National transmission network. If a thermal generating unit ceases generating unexpectedly the other generators on the system automatically increase their output to compensate. When this happens air grid will utilize fast acting generating units such as Turlough Hill to replace the lost generation leaving the overall system unaffected by the disturbance.

The control room at Turlough Hill known as the hydro control center or HCC which consists of a total of 19 generators. It monitors and controls the station's activity. The station staff work closely with air grid and determine all operational requirements.

The modern electricity system calls for very flexible generators to be able to cope with ever-changing generation and supply trends. Flexible fast responding plants such as Turlough Hill are needed to make up shortfalls in generation, complement wind power and deal with reactive demand on the system.

In use the station has been so successful that it has world-class availability performance. In addition, to this class-leading performance the system support capabilities of Turlough Hill make it a key part of the modern sustainable transmission system, enabling the addition of renewable energy and dealing with the requirements of ever-changing system demands.

Benefits: What are the benefits of Turlough Hill Power Station?

It is difficult to believe that this valley has been touched by modern technology. Yet here at Turlough Hill is a modern high-tech power station which combines the natural elements to produce quite efficient power. It relies on power from other generating stations to store its own power source for future use.

Turlough Hill provides all of these services and it's even more Relevant now than when it was initially conceived. Not only was the station innovative when it was built it has proven to be a truly visionary station at the heart of Ireland's modern electricity network. It's also reassuring to note that the security of supply is secured by the simple process of pushing water up a hill.

Not only does this reduce our reliance on fossil fuels but also helps keep costs low as well as reduce carbon emissions significantly compared with other forms of generation like coal or gas-powered stations - making it great news for both our wallet and planet alike!