The 2nd furnace station is called the heart of the Rooppur Nuclear Power Plant because of  there the nuclear fuel burning energy is produced and the electricity is generated.

What will Bangladesh Get from Here?

Exactly simply said this answer is the amount of electricity 24000 megawatts but that’s not original achievement. It’s important to be here electricity will be generating in low cost. Bangladesh has also Gas, Diesel, Furnace oil, Solar and coal-fired power plants. 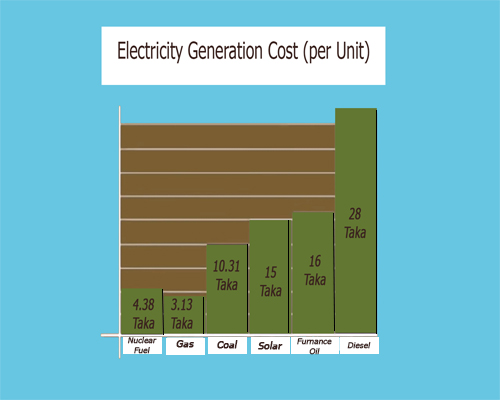 The lifespan of  Rooppur Nuclear Power Center is more than 60 years and which can be 80 years of possible. On the contrary, other nuclear power centers have the average life expectancy is only 15 to 20 years. So, it can easily say that Bangladesh will generate electricity for long time.

Why Nuclear Power is Important?

If the Bangladesh nuclear power center form just less expensive but that can be found in electricity are not these powers can be found for long?.

A few days before load shedding did not so happen in Bangladesh but now is being frequently. It is not like that the country does not have the capacity to produce electricity.

Rather, there is production capacity of Bangladesh and there are power plants but there is not essential fuel for production. Because diesel, coal and gas anything those are Bangladesh mainly imports. The crisis is being created due to the supply of the world in the world market. This is why they have to be patient with Oil and gas rich countries. But if you have nuclear power plant, you don't have to do that anymore.

2. The Pressure on The Economy will Ease

In order to set up the power center need huge investment. On Bangladesh, it is more than 1 lack and 13 thousand corers of money therefore so much huge investment or foreign loan. Now the consideration before the establishment of the nuclear power plant- Does the country's economy has the ability to carry such huge loans?

Power center has to be considered using is renewal energy. It doesn’t carbon emissions. So, European Union are recognizing as environmentally friendly. On the other hand, carbon emission being buried by electricity in the oil gas. It is increasing the climate change global warming.

The nuclear fuel used is very sensitive and there is a lot of panic. But remember that it is not a atomic bomb. It's a power station. There is no basis for the idea that there will be explosion or damage like an atomic bomb.

As nuclear fuel is used, here is the risk of spreading radioactivity. To survive that modern and proven technologies are using the world wide. Biggest accident in the nuclear power plant has just three whose latest was happened in Fukushima of Japan.

Why is There So Much Interest in It Worldwide?

Bangladesh is not too fast to get electricity from the nuclear power plant. It will take time to be inaugurated at least 2 years.