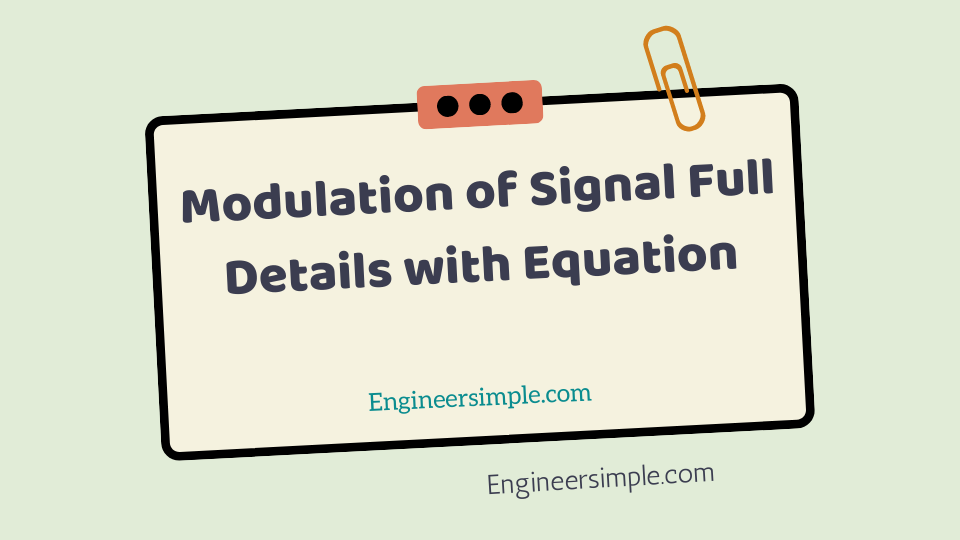 Once you have mastered the fundamentals of these techniques, you will easily understand how most modern communication systems work.

There are modulation of signal full details with equation in below:

Before it can be transmit, the information or intelligence must be convert to an electronic signal compatible with the medium.

A microphone changes voice signals (sound waves) into an analog voltage of varying frequency and amplitude. This signal is then pass over wires to a speaker or headphones. This is the way the telephone system works.

A video camera generates an analog modulation of Signal that represents the light variations along one scan line of the picture. This analog signal is usually transmit over a coaxial cable. A keyboard attach to a computer  generates binary data.

The computer stores the data and processes it in some way. The data is then transmit on cables to peripherals such as a printer or to other computers over a LAN. Regardless of whether the original information or intelligence signals are analog or digital, they are all referred to as base band signals.

For example, in many telephone and intercom systems, it is the voice itself that is placed on the wires and transmitted over some distance to the receiver. In most computer networks, the digital signals are applied directly to coaxial or twisted-pair cables for transmission to another computer.

In many instances, modulation of Signal base band signals are incompatible with the medium. Although it is theoretically possible to transmit voice signals directly by radio, realistically it is impractical. As a result, the base band information signal, be it audio, video, or data, is normally used to modulate a high-frequency signal called a carrier.

The higher- frequency carriers radiate into space more efficiently than the base band signals themselves. Such wireless signals consist of both electric and magnetic fields. These electromagnetic signals, which are able to travel through space for long distances, are also referred to as radio-frequency (RF) waves, or just radio waves.

This electronic technique  is the process of having a base band voice, video, or digital signal modify another, higher-frequency signal, the carrier. In Fig. 1-7 illustrate the process. The information or intelligence to be sent is said to be impressed upon the carrier.

Consider the common mathematical expression for a sine wave:

Figure 1-7 Modulation at the transmitter.

The three ways to make the base band signal change the carrier sine wave are to vary its amplitude, vary its frequency, or vary its phase angle. The two most common methods of modulation are amplitude modulation (AM) and frequency modulation (FM). In AM, the base band information signal called the modulating signal varies the amplitude of the higher-frequency carrier signal, as shown in Fig. 1-8(a). It changes the Vp part of the equation.

In FM, the information signal varies the frequency of the carrier, as shown in Fig. 1-8(b). The carrier amplitude remains constant. FM varies the value off in the first angle term inside the parentheses. Varying the phase angle produces phase modulation (PM). Here, the intelligence signal makes to vary by the second term inside the parentheses (θ). Phase modulation produces frequency modulation;

Therefore, the PM signal is similar in appearance to a frequency-modulated carrier. In Fig. 1-9 give two common examples of transmitting digital data by modulation. In Fig. 1-9(a), frequency-varying tones  convert the data. We call it frequency-shift keying (FSK).

In Fig. 1-9(b), the data introduces a 180º-phase shift. We call it phase-shift keying (PSK). Devices called modems (modulator & demodulator) translate the data from digital to analog and back again. Both FM and PM are forms of angle modulation.

At the receiver, extract the original base band signal amplifies and then demodulates to the carrier with the intelligence signal. Another name for the demodulation process is detection. (See Fig. 1-10.)

Figure 1-10 Recovering the intelligence signal at the receiver.