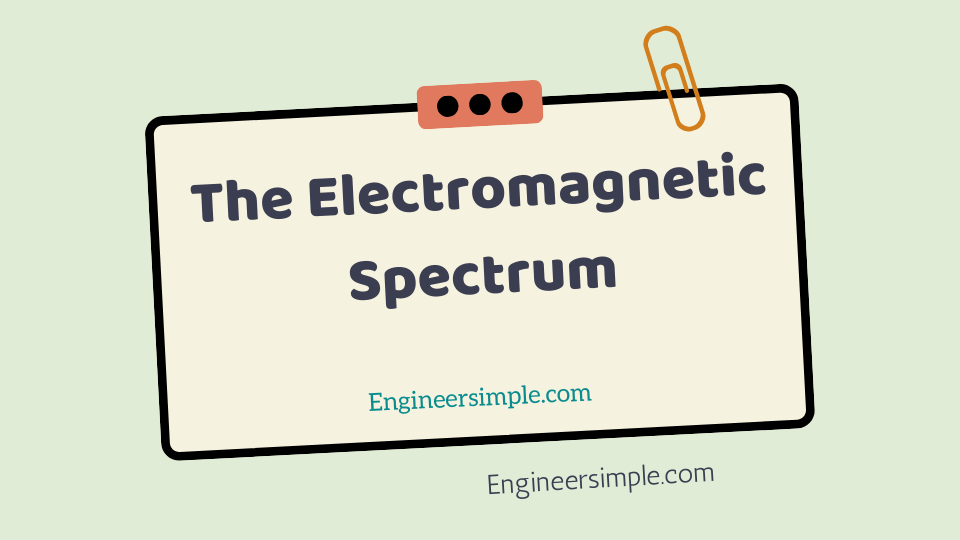 Electromagnetic waves are signals that oscillate; i.e., the amplitudes of the electric and magnetic fi elds vary at a specific rate. The field intensities fluctuate up and down, and the polarity reverses a given number of times per second. The electromagnetic waves vary sinusoidally.

Their frequency is measure in cycles per second (cps) or hertz (Hz). These oscillations may occur at a very low frequency or at an extremely high frequency. The range of electromagnetic signals encompassing all frequencies is refer to as the electromagnetic spectrum.

All electrical and electronic signals that radiate into free space fall into the electromagnetic spectrum.

Not included are signals carry by cables. Signals carried by cable may share the same frequencies of similar signals in the spectrum, but they are not radio signals.

Fig. 1-13 shows the entire electromagnetic spectrum, giving both frequency and wavelength. Within the middle ranges are located the most commonly used radio frequencies for two-way communication, TV, cell phones, wireless LANs, radar, and other applications.

At the upper end of the spectrum are infrared and visible light. Fig. 1-14 is a listing of the generally recognized segments in the spectrum used for electronic communication.

A given signal is locate on the frequency spectrum according to its frequency and wavelength.

Frequency is measured in cycles per second (cps). In electronics, the unit of frequency is the hertz, named for the German physicist Heinrich Hertz, who was a pioneer in the field of electromagnetics. One cycle per second is equal to one hertz, abbreviated (Hz). Therefore, 440 cps 5 440 Hz.

Fig. 1-15(a) shows a sine wave variation of voltage. One positive alternation and one negative alternation form a cycle. If 2500 cycles occur in 1 s, the frequency is 2500 Hz.

Prefixes representing powers of 10 are often used to express frequencies. The most frequently used prefixes are as follows:

Wavelength is the distance occupied by one cycle of a wave, and it is usually express in meters. One meter (m) is equal to 39.37 in (just over 3 ft, or 1 yd).

Wavelength is measure between identical points on succeeding cycles of a wave, as Fig. 1-15(b) shows. If the signal is an electromagnetic wave, one wavelength is the distance that one cycle occupies in free space.

It is the distance between adjacent peaks or valleys of the electric and magnetic fields making up the wave.

The wavelength of a signal, which is represented by the Greek letter λ (lambda), is computed by dividing the speed of light by the frequency f of the wave in hertz:

Note: In 1887 German physicist Heinrich Hertz was the first to demonstrate the effect of electromagnetic radiation through space. The distance of transmission was only a few feet, but this transmission proved that radio waves could travel from one place to another without the need for any connecting wires. Hertz also proved that radio waves, although invisible, travel at the same velocity as light waves. (Grob/Schultz, Basic Electronics, 9th ed., Glencoe/McGraw-Hill, 2003, p. 4)

For the purpose of classification, the electromagnetic frequency spectrum is divided into segments, as shown in Fig. 1-13. The signal characteristics and applications for each segment are discussed in the following paragraphs.

Extremely low frequencies (ELFs) are in the 30- to 300-Hz range. These include ac power line frequencies (50 and 60 Hz are common), as well as those frequencies in the low end of the human audio range.

Voice frequencies (VFs) are in the range of 300 to 3000 Hz. This is the normal range of human speech. Although human hearing extends from approximately 20 to 20,000 Hz, most intelligible sound occurs in the VF range.

Very low frequencies (VLFs) extend from 9 kHz to 30 kHz and include the higher end of the human hearing range up to about 15 or 20 kHz.

Many musical instruments make sounds in this range as well as in the ELF and VF ranges. The VLF range is also used in some government and military communication. For example, VLF radio transmission is used by the navy to communicate with submarines.

Low frequencies (LFs) are in the 30- to 300-kHz range. The primary communication services using this range are in aeronautical and marine navigation. Frequencies in this range are also used as subcarriers, signals that are modulated by the baseband information. Usually, two or more subcarriers are added, and the combination is used to modulate the final high-frequency carrier.

(0.3- to 3.0-MHz) range. The major application of frequencies in this range is AM radio

broadcasting (535 to 1605 kHz). Other applications in this range are various marine and

High frequencies (HFs) are in the 3- to 30-MHz range. These are the frequencies generally know as short waves. All kinds of simplex broadcasting and half duplex two-way radio communication take place in this range. Broadcasts from Voice of America and the British Broadcasting Company occur in this range.

Government and military services use these frequencies for two-way communication. An example is diplomatic communication between embassies. Amateur radio and CB communication also occur in this part of the spectrum.

Very high frequencies (VHFs) encompass the 30- to 300-MHz range. This popular frequency range is use by many services, including mobile radio, marine and aeronautical communication, FM radio broadcasting (88 to 108 MHz), and television channels 2 through 13. Radio amateurs also have numerous bands in this frequency range.

Ultrahigh frequencies (UHFs) encompass the 300- to 3000-MHz range. This, too, is a widely use  portion of the frequency spectrum. It includes the UHF TV channels 14 through 51, and it is use for land mobile communication and services such as cellular telephones as well as for military communication.

Some radar and navigation services occupy this portion of the frequency spectrum, and radio amateurs also have bands in this range.

Frequencies between the 1000-MHz (1-GHz) and 30-GHz range are called microwaves. Microwave ovens usually operate at 2.45 GHz. Super high frequencies (SHFs) are in the 3- to 30-GHz range. These microwave frequencies are widely used for satellite communication and radar. Wireless local-area networks (LANs) and many cellular telephone systems also occupy this region.

Extremely high frequencies (EHFs) extend from 30 to 300 GHz. Electromagnetic signals with frequencies higher than 30 GHz are refer to as millimeter waves.

Equipment used to generate and receive signals in this range is extremely complex and expensive, but there is growing use of this range for satellite communication telephony, computer data, short-haul cellular networks, and some specialized radar.

Frequencies Between 300 GHz and the Optical Spectrum:

This portion of the spectrum is virtually uninhabited. It is a cross between RF and optical. Lack of hardware and components limits its use.

Right above the millimeter wave region is what is call the optical spectrum, the region occupied by light waves. There are three different types of light waves: infrared, visible, and ultraviolet.

The infrared region is sandwich between the highest radio frequencies (i.e., millimeter waves) and the visible portion of the electromagnetic spectrum. Infrared occupies the range between approximately 0.1 millimeter (mm) and 700 nanometers (nm), or 100 to 0.7 micrometer (μm).

One micrometer is one-millionth of a meter.

Infrared is produce by light-bulbs, our bodies, and any physical equipment that generates heat.

Infrared signals can also be generate by special types of light-emitting diodes (LEDs) and lasers and it are use for various special kinds of communication. For example, infrared is use in astronomy to detect stars and other physical bodies in the universe, and for guidance in weapons systems, Infrared wavelengths are often give in micrometers or nanometers.

Radiation of Infrared  is generally associate with heat.where the heat radiate from airplanes or missiles can be pick up by infrared detectors and used to guide missiles to targets.

Infrared is also use in most new TV remote-control units where special coded signals are transmit by an infrared LED to the TV receiver for the purpose of changing channels, setting the volume, and performing other functions. Infrared is the basis for all fi beroptic communication.

Optical devices such as lenses and mirrors are often use to process and manipulate infrared signals, and infrared light is the signal usually propagate over fi beroptic cables.Infrared signals have many of the same properties as signals in the visible spectrum.

Just above the infrared region is the visible spectrum we ordinarily refer to as light. Light is a special type of electromagnetic radiation that has a wavelength in the 0.4- to 0.8-μm range (400 to 800 nm).

Light wavelengths are usually express in terms of angstroms (Å). An angstrom is one ten-thousandth of a micrometer; for example, 1 Å = 10-10 m. The visible range is approximately 8000 Å (red) to 4000 Å (violet).

Light is use for various kinds of communication. Light waves can be modulate and transmit through glass fibers, just as electric signals can be transmitted over wires.

The great advantage of light wave signals is that their very high frequency gives them the ability to handle a tremendous amount of information. That is, the bandwidth of the baseband signals can be very wide.

Light signals can also be transmit through free space. Various types of communication systems have been create using a laser that generates a light beam at a specific visible frequency. Lasers generate an extremely narrow beam of light, which is easily modulate with voice, video, and data information.

Ultraviolet light (UV) covers the range from about 4 to 400 nm.It generate by the sun is what causes sunburn.

Beyond the visible region are the X-rays, gamma rays, and cosmic rays. Ultraviolet is also generate by mercury vapor lights and some other types of lights such as fluorescent lamps and sun lamps.These are all forms of electromagnetic radiation, but they do not figure into communication systems and are not covered here.Ultraviolet is not use for communication.; its primary use is medical.

Note: Although it is expensive to build a fiber-optic or wireless network, servicing each additional user is cost-effective. The more users a network has, the lower the overall cost.