A generating station which utilises the potential energy of water at a high level for the generation of electrical energy is known as a hydro-electric power station. 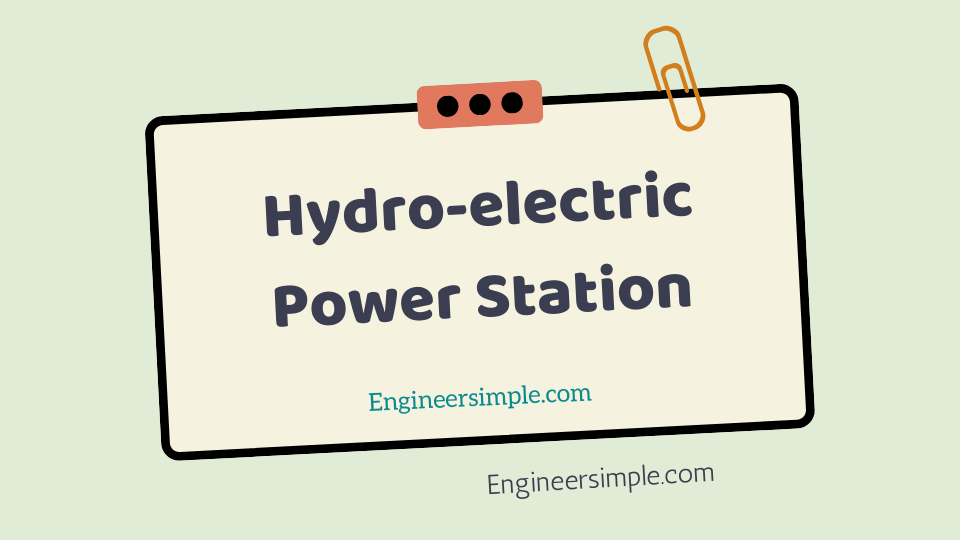 Hydro-electric power stations are generally located in hilly areas where dams can be built conveniently and large water reservoirs can be obtained. In a hydro-electric power station, water head is created by constructing a dam across a river or lake. From the dam, water is led to a water turbine. The water turbine captures the energy in the falling water and changes the hydraulic energy (i.e., product of head and flow of water) into mechanical energy at the turbine shaft. The turbine drives the alternator which converts mechanical energy into electrical energy. Hydro-electric power stations are becoming very popular because the reserves of fuels (i.e., coal and oil) are depleting day by day. They have the added importance for flood control, storage of water for irrigation and water for drinking purposes.

(i) It requires no fuel as water is used for the generation of electrical energy.

(ii) It is quite neat and clean as no smoke or ash is produced.

(iii) It requires very small running charges because water is the source of energy which is available free of cost.

(iv) It is comparatively simple in construction and requires less maintenance.

(v) It does not require a long starting time like a steam power station. In fact, such plants can be put into service instantly.

(vi) It is robust and has a longer life.

(vii) Such plants serve many purposes. In addition to the generation of electrical energy, they also help in irrigation and controlling floods.

(viii) Although such plants require the attention of highly skilled persons at the time of construction, yet for operation, a few experienced persons may do the job well.

(i) It involves high capital cost due to construction of dam.

(ii) There is uncertainty about the availability of huge amount of water due to dependence on weather conditions.

(iii) Skilled and experienced hands are required to build the plant.

(iv) It requires high cost of transmission lines as the plant is located in hilly areas which are quite away from the consumers.

Although a hydro-electric power station simply involves the conversion of hydraulic energy into electrical energy, yet it embraces many arrangements for proper working and efficiency. The schematic arrangement of a modern hydro-electric plant is shown in Fig. 2.2.

The dam is constructed across a river or lake and water from the catchment area collects at the back of the dam to form a reservoir. A pressure tunnel is taken off from the reservoir and water brought to the valve house at the start of the penstock. The valve house contains main sluice valves and automatic isolating valves. The former controls the water flow to the power house and the latter cuts off supply of water when the penstock bursts. From the valve house, water is taken to water turbine through a huge steel pipe known as penstock. The water turbine converts hydraulic energy into mechanical energy. The turbine drives the alternator which converts mechanical energy into electrical energy.

A surge tank (open from top) is built just before the valve house and protects the penstock from bursting in case the turbine gates suddenly close due to electrical load being thrown off. When the gates close, there is a sudden stopping of water at the lower end of the penstock and consequently the penstock can burst like a paper log. The surge tank absorbs this pressure swing by increase in its level of water.

The following points should be taken into account while selecting the site for a hydro-electric power station :

(i) Availability of water: Since the primary requirement of a hydro-electric power station is the availability of huge quantity of water, such plants should be built at a place (e.g., river, canal) where adequate water is available at a good head.

(ii) Storage of water: There are wide variations in water supply from a river or canal during the year. This makes it necessary to store water by constructing a dam in order to ensure the generation of power throughout the year. The storage helps in equalising the flow of water so that any excess quantity of water at a certain period of the year can be made available during times of very low flow in the river. This leads to the conclusion that site selected for a hydro-electric plant should provide adequate facilities for erecting a dam and storage of water.

(iii) Cost and type of land: The land for the construction of the plant should be available at a reasonable price. Further, the bearing capacity of the ground should be adequate to withstand the weight of heavy equipment to be installed.

(iv) Transportation facilities: The site selected for a hydro-electric plant should be accessible by rail and road so that necessary equipment and machinery could be easily transported. It is clear from the above mentioned factors that ideal choice of site for such a plant is near a river in hilly areas where dam can be conveniently built and large reservoirs can be obtained.

The constituents of a hydro-electric plant are (1) hydraulic structures (2) water turbines and (3) electrical equipment. We shall discuss these items in turn.

(i) Dam: A dam is a barrier which stores water and creates water head. Dams are built of concrete or stone masonary, earth or rock fill. The type and arrangement depends upon the topography of the site. A masonary dam may be built in a narrow canyon. An earth dam may be best suited for a wide valley. The type of dam also depends upon the foundation conditions, local materials and transportation available, occurrence of earthquakes and other hazards. At most of sites, more than one type of dam may be suitable and the one which is most economical is chosen.

(ii) Spillways: There are times when the river flow exceeds the storage capacity of the reservoir. Such a situation arises during heavy rainfall in the catchment area. In order to discharge the surplus water from the storage reservoir into the river on the down-stream side of the dam, spillways are used. Spillways are constructed of concrete piers on the top of the dam. Gates are provided between these piers and surplus water is discharged over the crest of the dam by opening these gates.

(iii) Headworks: The headworks consists of the diversion structures at the head of an intake. They generally include booms and racks for diverting floating debris, sluices for by-passing debris and sediments and valves for controlling the flow of water to the turbine. The flow of water into and through headworks should be as smooth as possible to avoid head loss and cavitation. For this purpose, it is necessary to avoid sharp corners and abrupt contractions or enlargements.

(iv) Surge tank: Open conduits leading water to the turbine require no protection. However, when closed conduits are used, protection becomes necessary to limit the abnormal pressure in the conduit. For this reason, closed conduits are always provided with a surge tank. A surge tank is a small reservoir or tank (open at the top) in which water level rises or falls to reduce the pressure swings in the conduit.

(v) Penstocks: Penstocks are open or closed conduits which carry water to the turbines. They are generally made of reinforced concrete or steel. Concrete penstocks are suitable for low heads (< 30 m) as greater pressure causes rapid deterioration of concrete. The steel penstocks can be designed for any head; the thickness of the penstock increases with the head or working pressure.

Note: Because in case of open conduits, regulating gates control the inflow at the headworks and the spillway discharges the surplus water.

(i) Impulse turbines: Such turbines are used for high heads. In an impulse turbine, the entire pressure of water is converted into kinetic energy in a nozzle and the velocity of the jet drives the wheel. The example of this type of turbine is the Pelton wheel. It consists of a wheel fitted with elliptical buckets along its periphery. The force of water jet striking the buckets on the wheel drives the turbine. The quantity of water jet falling on the turbine is controlled by means of a needle or spear placed in the tip of the nozzle. The movement of the needle is controlled by the governor. If the load on the turbine decreases, the governor pushes the needle into the nozzle, thereby reducing the quantity of water striking the buckets. Reverse action takes place if the load on the turbine increases.

A Francis turbine is used for low to medium heads. It consists of an outer ring of stationary guide blades fixed to the turbine casing and an inner ring of rotating blades forming the runner. The guide blades control the flow of water to the turbine. Water flows radially inwards and changes to a downward direction while passing through the runner. As the water passes over the “rotating blades” of the runner, both pressure and velocity of water are reduced. This causes a reaction force which drives the turbine. A Kaplan turbine is used for low heads and large quantities of water. It is similar to Francis turbine except that the runner of Kaplan turbine receives water axially. Water flows radially inwards Bhakra Dam through regulating gates all around the sides, changing direction in the runner to axial flow. This causes a reaction force which drives the turbine.