Given a number, write a program using loop to reverse the digits of the number. For example, the number 12345 Should be written as 54321 An Array is a fixed-size sequenced collection of elements of the same data type. It is simply a grouping of like-type data. In its simplest form, an array can be used to represent a list of numbers, or a list of names. For example, we can use an array name salary to represent a set of salaries of a group of employees in an organization. For example:

represents the salary of 10th employee. While the complete set of values is referred to as an array, individual values are called elements.

A list of items can be given one variable name only one subscript and a variable is called a single-subscripted variable or a one dimensional array. For example, if we want to represent a set of five numbers, say (35, 40, 20, 57, 19), by an array variable number, then we may declare the variable number as follows

and the computer reserves the five storage locations as follows below: 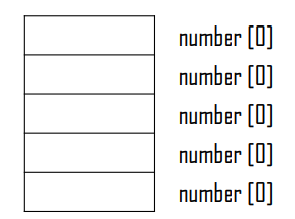 Declaration of one Dimensional Arrays:

Like any other variable, arrays must be declared before they are used so that the complier can allocate space for them in memory. The general form of array declaration is

The type specifies the type of element that will be contained in the array, such as int, float, char and the size indicates the maximum number of elements that can be stored inside inside the array. For example,

Why we need to allow one extra element space when declaring character arrays?

The size in a character string represents the maximum number of characters that that the string can hold. For instance,

declares the name as a character array variables that can hold a maximum of 10 characters. Suppose we read the following string constant into the string variable name.

Each character of the string is treated as an element of the array name and is stored in the memory as follows: When the compiler sees a character string, it terminates it with an additional null character. Thus, the element name[10] holds the null character ‘\0’.

Initialization of one dimensional arrays:

After an array is declared, its elements must be initialized. Other wise they contain ” garbage ”. An array can be initialized at either of the following stages:

The general form of initialization of arrays is:

The values in the list are separated by commas. For instance, the statement

will  variable number as an array of size 3 and will assign zero to each element.

An array can be explicitly initialized at run time. For example consider the following segment of the C program.

We can also use a read function such as scanf to initialize an array.

For example, the statements 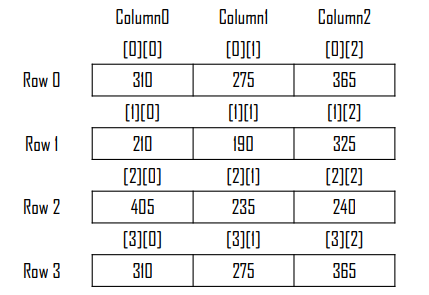