What can be deployed to intercept and log network traffic?

Protocol analyzers are tools that can be used to capture, decode, and analyze network traffic. They are often used by network administrators to troubleshoot network problems and by security analysts to monitor network traffic for suspicious activity.

There are a few different ways to intercept and log network traffic. One way to do this is by using a packet sniffer. A packet sniffer can be used to capture and log all data packets that are sent over the network. Another  way is to use a proxy server. A proxy server can be used to intercept and log all incoming and outgoing traffic from your computer. 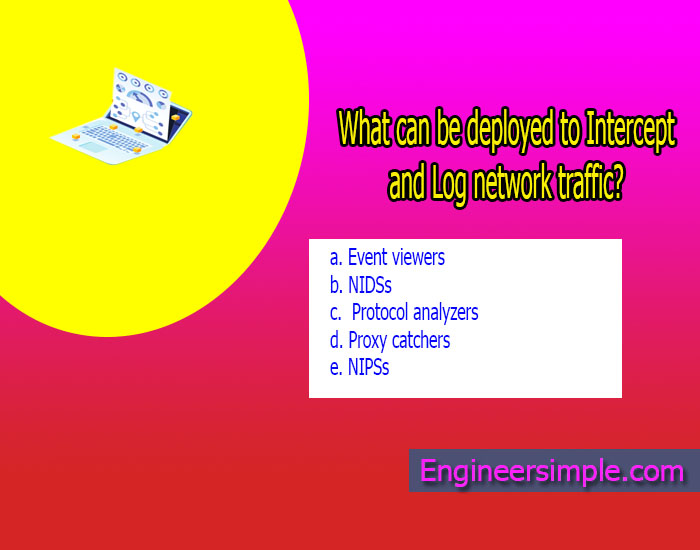 1. How to use Protocol analyzers to intercept and log incoming or outgoing traffic?

Packet sniffers or Protocol analyzers are the powerful tool for intercepting and logging network traffic. By capturing packets of data as they travel across a network, a packet sniffer can provide valuable insights into the activities of users and devices on that network.

It is a computer program or piece of computer hardware that can intercept and log traffic that passes through a network.

Packet sniffers can be used to monitor traffic for troubleshooting purposes, or to track down malicious activity. In either case, it is important to understand how packet sniffers work in order to use them effectively.

When data travels across a network, it is broken up into small units called packets. Each packet contains information about where it came from and where it is going, as well as the actual data being transmitted.

A packet sniffer captures these packets of data as they travel through the network. By default, most packet sniffers will capture all packets passing through the device on which they are installed. However, many Packet Sniffers allow you to configure what kinds of traffic you want to capture. For example, you may only want to capture traffic destined for a specific IP address or port number.

Once captured, the Packets can then be logged so that you can review them later. Some Packet Sniffers also have built-in tools for analyzing captured traffic, which can be helpful for identifying patterns or trends. Reviewing this information can give you insights into what users and devices are doing on your network and whether there might be developing issues that need attention.

How does Packet Sniffing work-

Here we can see, two configured steps of sniffers.

A sniffing attack is a type of network attack in which an attacker intercepts data being sent over a network. In order to carry out a sniffing attack, the attacker must first place their network interface card (NIC) into Promiscuous Mode.

By using Packet sniffer in Promiscuous Mode, attackers or IT professionals can decode any data packet.

This allows the NIC to receive all network traffic, not just traffic addressed to the attacker's own computer. Once the attacker has intercepted the data, they can then read it and potentially use it to gain unauthorized access to the network or its resources.

2. How to use Proxy Server to intercept and log incoming or outgoing traffic?

A proxy server is a computer that acts as an intermediary between our computer and the internet. It can be used to intercept and log network traffic, making it a valuable tool for security and monitoring purposes.

Here are some tips on using a Proxy Server to its full potential:

1. Choose the right location for your proxy server. Ideally, it should be situated in a central location so that it can easily monitor all incoming and outgoing traffic.

2. Configure your proxy server to log all data passing through it. This will give you valuable insights into what is happening on your network at any given time.

3. Use filtering rules to selectively block or allow certain types of traffic through the proxy server. This can be useful for preventing malicious activity or blocking unwanted content. For example, you could block all websites except those related to work or education .

4. Make sure to secure your proxy server with strong authentication measures to prevent unauthorized access.