What DSL technology provides equal bandwidth in both directions? 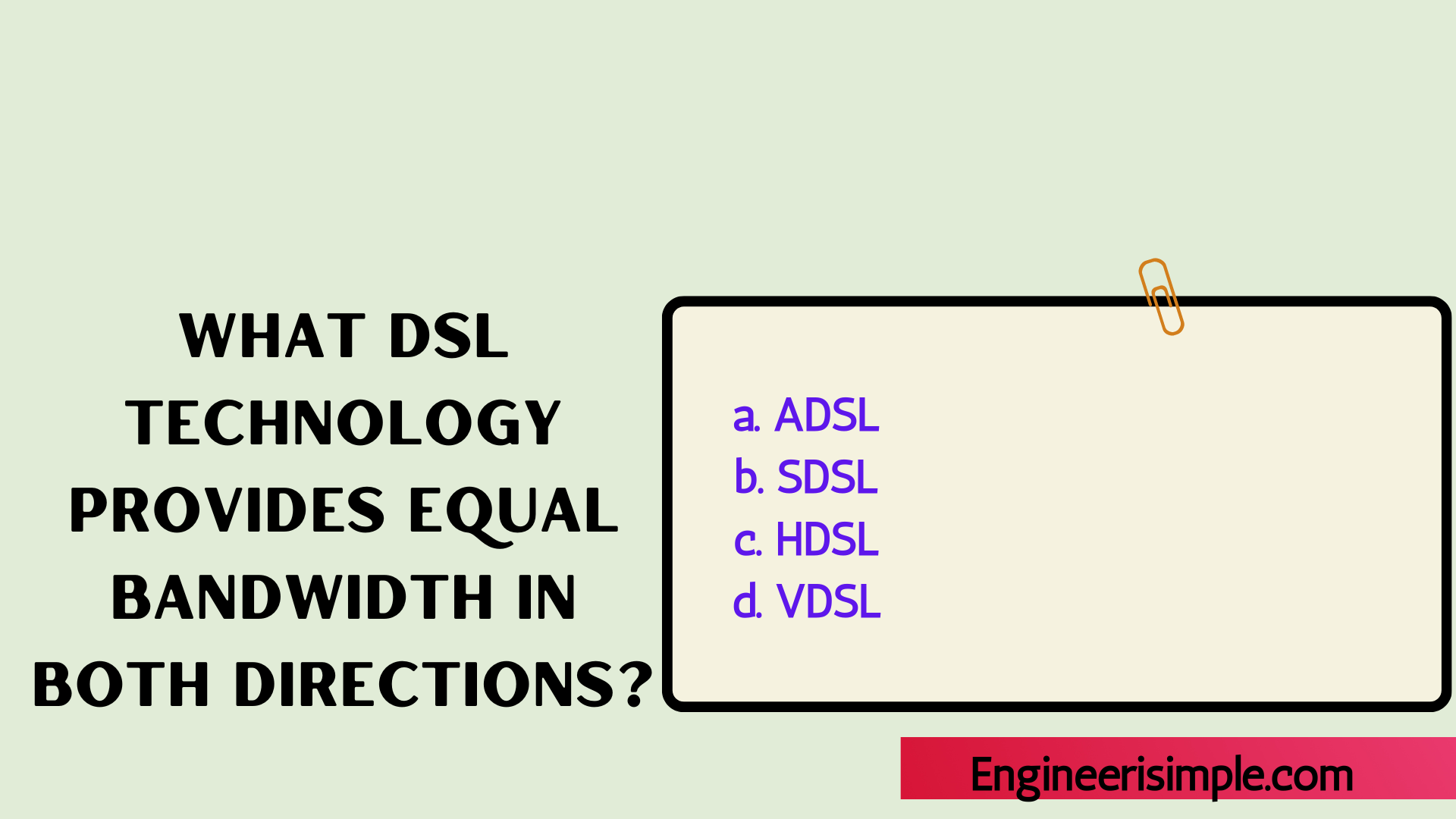 SDSL (Symmetric Digital Subscriber Line) is a type of digital subscriber line (DSL) technology that provides high-speed, symmetric bandwidth on a single, dedicated telephone line. Unlike other types of DSL, SDSL sends and receives digital data at the same rate, which makes it ideal for applications that require large amounts of data to be transferred in both directions, such as video conferencing, online gaming, and VoIP (Voice over Internet Protocol) services.

SDSL is different from other forms of DSL in that it utilizes a single copper wire pair to provide the same bandwidth in both directions. This means that the same amount of data is sent and received at the same speed, providing users with an even and consistent connection. SDSL also has the advantage of being much faster than other types of DSL, with download speeds of up to 15 Mbps and upload speeds of up to 1 Mbps.

The symmetric nature of SDSL makes it particularly useful for businesses that rely on two-way communication, such as video and audio streaming services, or VoIP. Because SDSL provides the same amount of bandwidth in both directions, it is able to support multiple users simultaneously with no noticeable drop in performance. This makes it the ideal choice for businesses that need to transfer large amounts of data in both directions.

In addition to its symmetric bandwidth capabilities, SDSL also provides other benefits. It is more secure than other forms of DSL, and is less susceptible to outside interference, such as electromagnetic interference (EMI). This makes it ideal for business networks that need to keep their data secure.

What is the benefit of using SDSL technology?

SDSL (Symmetric Digital Subscriber Line) technology is an internet access method that uses existing copper wires to transmit data at speeds of up to 768 Kbps.

SDSL is also known as high-speed DSL and is normally used by businesses. SDSL services are available from a variety of DSL providers and are typically more expensive than ADSL services.

SDSL services can deliver speeds ranging from 256 Kbps to 1.544 Mbps. Check out the following link to know more about SDSL technology.

Bandwidth is the amount of information that can be transmitted over a given amount of time. It is measured in bits per second. The larger the bandwidth, the faster the internet connection.

What is DSL Technology?

DSL works through a process called _ modulation _ which changes digital information into a type of analog signal. The analog signal is then brought over a phone line to the user.

Once the signal reaches the user, it is converted back into a digital signal and the user's computer reads it and turns it back into information.

DSL technology uses telephone wires for connectivity between the customers and the Internet Service Provider (ISP). The DSL modem provided by the ISP converts the data from the Internet protocol to the local area network (LAN) and vice versa.

SDSL is an ideal choice for businesses that need fast, symmetric bandwidth and reliable connections. With its symmetric capabilities, SDSL ensures that users receive an equal amount of bandwidth in both directions, allowing them to take advantage of a variety of applications without having to worry about connection speed.