A. It is underdeveloped in some countries.

B. There are not enough rivers to make it worthwhile.

D. River water levels are too low during the dry season to generate power.

Answer: A. It is underdeveloped in some countries & C. Deforestation causes sediment, which reduces water flow.

The effects of underdevelopment and deforestation on hydroelectric power in Southern Africa cannot be underestimated.

Underdevelopment in some countries means that there isn’t enough infrastructure in the Southern Africa to take advantage of the potential of hydroelectric power. It leads to a shortage of hydroelectric power, as well as environmental issues such as the destruction of ecosystems and disruption of migratory fish patterns. 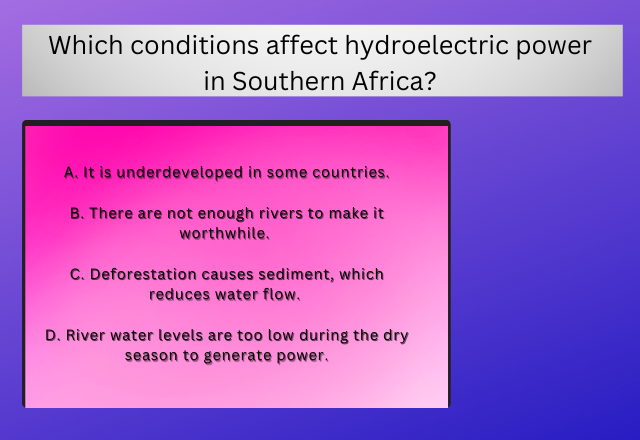 Deforestation also contributes to a reduction in hydroelectric power in Southern Africa. As trees are removed from the landscape, the soil is exposed to the elements and quickly erodes. This sediment accumulates in rivers, reducing the flow of water and making it harder for hydroelectric dams to generate power. Additionally, the sediment can clog up the turbines of hydroelectric plants, further reducing the amount of electricity that can be generated.