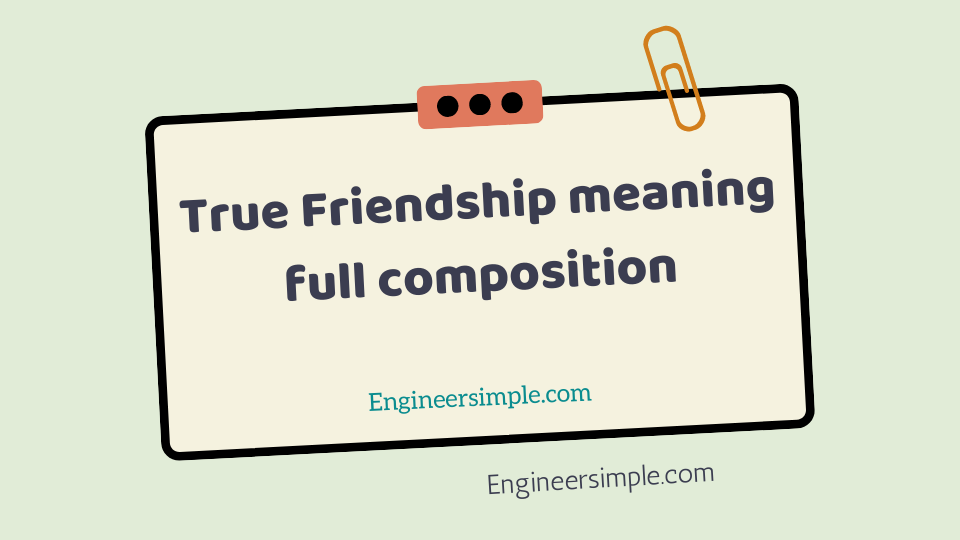 Friendship refers to bondage between two or among three or more persons. It is a heavenly relationship. A true friendship meaning may occur within blood or outside blood.

Again, ‘love’ refers to the name of a passion or sentiment between the two ones. It is also a part of heavenly bondage. It may again also occur within or outside blood.

So, Love and Friendship are the two relative terms inherent in the human heart although sometimes found in animals.

These two abstract things are interrelated. In the absence of one, another one is valueless. For example, if a man has no sense of love, how he will approach to build up a friendship with other ones.

Thus, we can think vice-versa. Despite this, if anyone becomes able to make such kind of relationship, his bondage will prove to feign soon.

So, another abstract object here is necessary to build up real friendship and it is truth. In the absence of ‘Truth,’ love or friendship or such kinds of passion are valueless.

In most cases, bondage breaks. Then, it may arise a question. If bondage will break, why did it start first?

The answer is simple. While starting, the truth was absent; there was greed instead. So, if soon comes to light that where there is no truth, there is no love or friendship.

What a man having greed is heart expects, may not be achieved from his fellows. And then, there discovers the crack between them and the relationship breaks.

So, truth, faith, devotion, respect, sacrifice, etc. are essential in place of greed avarice falsehood to continue the bondage of love and relationship.

Friendship is useful for one’s emotional health. Persons who have no friends will not know who confide their secrets.

If a man keeps his secrets to himself, he will be living under a severe mental strain.

Again, a person who has friends will multiply his joy and diminish his grief.

A man’s joy is greatly increased when he speaks about it to his friend; and, likewise, his grief is halved when he imparts it to a friend.

Secondly, Friendship also enables a man to understand things more clearly. In the course of a conversation with a friend, a man’s ideas take better shape and a man’s mind becomes clearer than before.

Thus by speaking his thoughts to a friend, he becomes more sure of himself. His conversation with a friend sharpens his wits. A friend also helps to clarify understanding. A friend can on our behalf perform contain actions that we might be unable to perform for various reasons.

Thus, we can say that the principal use of friendship is that it enables a man to give on the outlet to his feelings and emotions. If a man has a friend, he can communicate to him all sorrows, joys, fears, hopes, etc. and thus he can obtain relief.

Who can make a friendship?

The man who has sacrificing tendency and a sense of gratefulness only can be able to make friends.

A true friend is one who stands behind his other friends in times of both grief and joy. He is the person with whom you feel comfortable and safe and you can easily share your thoughts, views, and feelings.

He is the man who loves you unconditionally, understands you but never judges you and always thinks of you positively. The proverb goes- ‘A friend in need is a friend indeed.’ The top err is human.

A man may knowingly unknowingly make mistakes. But a true friend always tries to make him correct. Sometimes, the man does not correct himself despite his friend’s advice.

Hence, a true friend allows him a period to understand his mistake and continues to cite examples in one may another.

Even if the man does not pay any heed to him, he will still remain his side and will continue to try to same him. The true friend must bear in mind that today of tomorrow his friend will understand his fault.

However, when his friend becomes aggrieved of his fault, the true friend neither teases him nor pricks him; rather consoles and inspires him to take steps for future life.

How can we make a sustainable friendship?

Many people will come to deceive you in the guise of a true friend. But this bondage will last for a few moments, Sooner or later he will leave you. When he finds nothing rest inside of you.

First, try to win his heart and then make friendship. The man who comes forward to make friendship with you may deceive you. So, try to guess his demand and act in a way that you do not have such a thing.

Finding the absence of his longing in you, he must go away if he is not a real friend. But if he is a true friend of you, he must be with you even if he gets nothing from you. Thus, the relationship will be sustainable. The next factor to make a true friendship meaning sustainable is well communication or co-operation.

Will we lose the friends whom we can not trust?

No, we won’t. We make up our minds not to lose the friends whom we have got even if they are not ideal friends.

Because friendship is an asset. It will provide us fruit if we utilize and nurse it properly. So, the man behaving doubtful may be taken aside and may be allowed time to change their attitude.

If they are human beings, if they are not demons and if we are true, honest and perseverant, today or tomorrow they will change their minds and it will be seen in their behavior. Then a true friendship meaning will be built.

If we do not forget the co-incidence of the Prophet Mohammad (SM) and the old woman who used to spread thorn on the way of the prophet (SM). Everybody, he took the thorns aside and passed the way.

However, he did not become angry. He wanted to win the lady not by weapon but by heart. Once, he got a chance. He found no thorn in this way.

So, he thought the lady to be ill. He went to her house with some fruit, kept the fruit beside the sleeping lady and swept the room.

The next day, while again he was doing so, the lady got awakened and understood her fault. Thus, she became his devotee and there built a life-long friendship between them.

So, we can conclude saying that a true friendship meaning is not a matter of joke but a matter of sacrifice, perseverance, patience, truth, and honesty.