Among the various renewable energy sources in this world, wind energy is the most interesting as well as unpredictable. A wind power plant, also known as windmills is actually a very old concept. The inception of this technology is almost two thousands years old. This windmill technology has been assisting mankind with various forms of other energy that can be converted by it. A good number of wind sources is quite tough to achieve. It is more suitable for offshore areas, islands etc.

Available wind source areas are called wind pockets. A perfect site survey for a wind power plant can consist of a couple of wind pockets and the generation increases with the increase in the number of wind pockets. 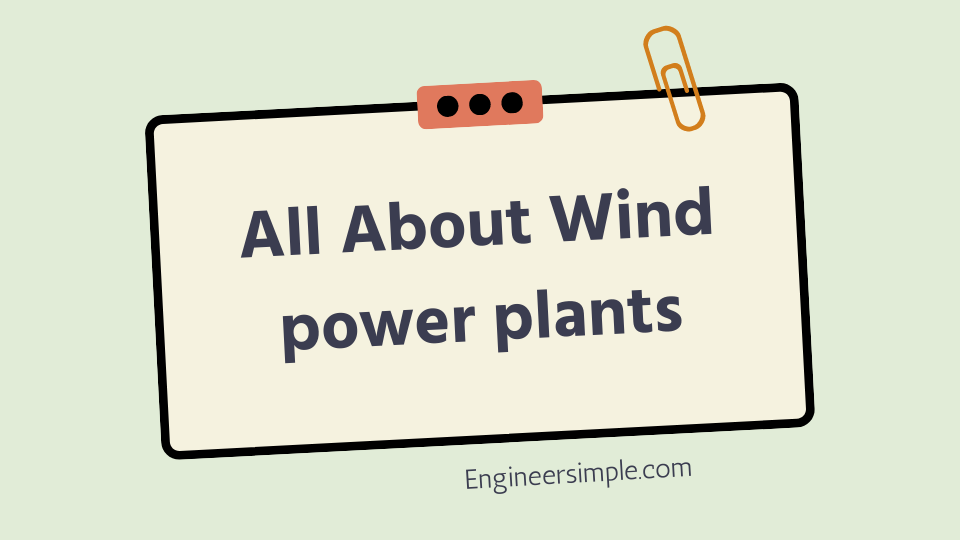 The technology of wind power plants is also quite interesting. It uses aerodynamic mechanisms to convert wind energy or power to electrical energy that we use as electricity. The term that is used here as "aerodynamic" is the orientation of the turbine blade of the wind power plant.

This type of power plant generally consists of a wind turbine with rotating blades which is attached with a generator that creates electricity. The blowing wind makes these blades rotate. It then produces electricity with the help of the generator attached to it. This generator converts the kinetic energy into electricity.

Therefore, the basic and major components of wind power plant are-

Let us now discuss the purpose of the gearbox. As the wind speed is unpredictable and not viable enough to produce electricity with its low rpm, a device is therefore introduced to cope up with this issue. Also, noise is produced from the rotating blades of wind turbines that cause its speed getting lower.

Thus, a gearbox is attached between the wind turbine and the generator which maintains the high speed ratio of the wind power to increase its speed. Speed ration is generally 1.90 in a typical wind power plant to operate. But there is another problem with the unpredictable wind speed for its highest speed.

To overcome this, a braking mechanism is introduced between gearbox and the generator in order to cut off the system during excessive windy conditions. The cut off speed for a typical wind turbine is 80km per hour. For the safety of the wind power plant, the turbine is stopped when cut off speed is achieved.

Cables are there for connecting the generator to the step-up transformer which is situated at the base of the wind turbine. Its purpose is to step up the produced voltages to the transmission line for the distribution system.

A common talk is frequently coming up in this topic that the wind velocity is unpredictable as well as its direction. Therefore, if the wind turbine is faced towards a certain direction, the proper output of the system can not be achieved.

So it should be movable in order to catch as much wind as it can. Taking into consideration this point, another device called wind velocity sensor is used for modern wind power plants to achieve the maximum efficiency. It is fitted at the top head of the wind turbine along with the wind vane and its purpose is to fetch the direction of the wind and send the signal to the controller which then drives the yawing mechanism of the wind turbine.

A yaw motor is there whose task is to operate the yaw mechanism to the direction of the wind velocity. Thus it achieves its goal to capture maximum wind energy.

A wind turbine is a clean source of energy with zero carbon emission from it. Though the availability of wind pockets is quite hard to achieve by costly site surveys, it is still feeding the world with a handful of electricity. Currently it has approx 6% of the world's energy share with more than 700 gigawatt of electricity.

Apart from having certain drawbacks like huge amounts of noise production and uncertainty of wind sources, wind power is currently a demanding renewable energy source of this world. The capacity of wind turbine ranges from 1kW to several megawatt.

One interesting fact about wind power plants is that they can be implemented both on-shore and off-shore basis. As we know the world has only 29% landmass covering its whole, so off-shore wind power plants are gradually increasing and is a good source to harness wind power for countries having long coastlines. Wind power plant is superior in this case compared to other renewable energy sources.